A brief interruption in the cockatrice project for the following:

While filling out a job application today, I was referred to an assessment. Having done these before for other jobs at largish companies, I thought little of it, and in fact, it started off like any other with the usual questions, like “I never lie,” “I always get to work on time,” and other silly things that I probably honested myself out of a job answering.

Around Question 70 or so out of 115, the questions changed from simple statements to math problems. I very nearly gave up at the sight of the first one; I had a hard time believing that any online job application could be worth that much effort, but then decided to soldier through it- how hard could it be?

A better question would probably have been: how much 7th-10th-grade mathematics do I remember? The answer was “not that much.”

Some Googling around and trying to once again wrap my head around things that I never really liked doing as a surly preteen and eventually I got it all done. The worst part is that I’ll probably never know just how I did, which annoys me more than anything else: 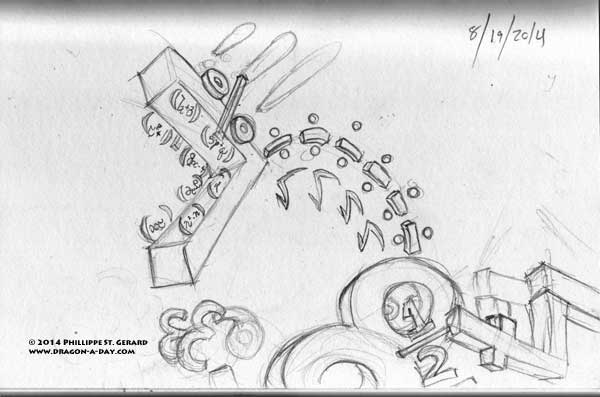 Some of you might remember the Catastrophic Math Dragon from 2012; it seemed completely appropriate for this little tale.

This entry was posted in Dragon-A-Day, Online, personal, Sketch and tagged catastrophic, dragon, Math, stuff for other stuff. Bookmark the permalink.