Like I mentioned in the excerpt for this post about a week ago, some day I will run out of Bible quotes about Leviathan, and I will be sad.

In an attempt to stave off that day, I went looking for other points of view, even going so far as to investigate the book by Hobbes of the same name. It might have been because I’m sleepy, but statecraft didn’t quite lend itself to much draconic inspiration tonight, which I suppose is okay, at least for now, because I still have a day or two.

Then again, I forgot that last year I was chewing through the details of Leviathan’s horns; I had mistakenly thought I did the triptych that year. Digging through the posts also reminds me that at one point I had thought of doing something with Behemoth, then abandoned it, so I picked that up again: 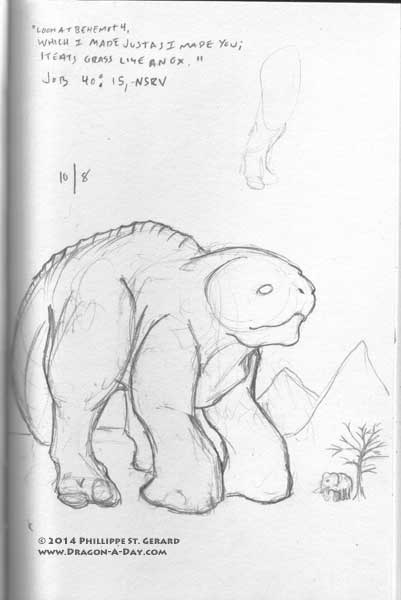 Some other viewpoints I came across were not only willing to acknowledge the idea that Leviathan and Friends might have existed or even still exist (as opposed to being common animals dressed up with a bit of poetry) suggested that Behemoth was a gentle soul, unlike Leviathan, which was why God took such pains to describe Leviathan’s ferocity, as opposed to merely describing Behemoth’s enormity. This still doesn’t help me, as I don’t know what Behemoth looks like, but it’s something at least.

I also didn’t know what to do with the toes. I was thinking of a cross between an elephant and rhinoceros, but ended up leaving it for now. Behemoth (in this sketch anyway) doesn’t have quite enough loin for its strength to reside in, so I’ll revisit that as well.