So while mulling over what to do, I thought of the song “Leviathan” by Iron Fire. More specifically, the hook:

“In the hour of need we fight together
Against the unknown force
We face the deepest fear of mankind, in the

Jaws of the leviathan, in the jaws
Of the mighty beast,

in the jaws
of the leviathan
in the jaws
All hell breaks loose
Prepare for the arrival
There is no survival,”

I found myself wanting to do some sort of maw shot, Levaithan’s jaws flung wide, fiery eyes ablaze, all that good stuff. I found myself a bit stymied by the irregular head shape as well as the hyper-hyper extending jaw.

I’m no kinesiologist, and I’m certainly not a biologist, but I might have gone awry with the jaws-my initial idea was to evoke the look of deepsea monsters like the gulper/pelican eel, or even the egg-eating snake. Not that I haven’t opened the mouth before, but some four years later I’m a little more self-conscious about the Rule of Cool, and there’s also the question of scale.

Leviathan is Absurdly Large. This is a thing.

However, if Leviathan eats “one whale a day,” does he need the hyper extending jaw? How big is Absurdly Large anyway? I’ve always drawn him to the point where whales are seriously dwarfed by his bulk, which seems to kind of defeat the point, aside from the whole “density of prey thing” that I just learned about. As it turns out, he might actually need it, just to catch food.

Working that out in my head didn’t solve the scale issue, but it gave me the gumption i needed to at least brave the maw: 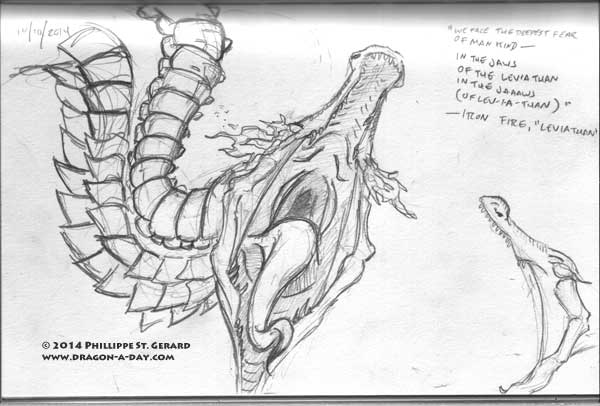