Today was a day. Dragged myself out of bed to get to the usual clusterfuck at work early, then dealt with things wayyy outside of my pay grade (literally) pretty much all day to the point that people at work believe that I’m light years more experienced and important than I actually am.  Like managing the store level experienced. smh.

Came home to be annoyed for an hour playing Borderlands with a friend (he insists it’s the lack of controller, but really I haven’t felt engaged by the game and am boredly running around shooting things that don’t matter), then almost phoned it in.

A playlist on Spotify and some chasing the dragon later, and this started to take shape: 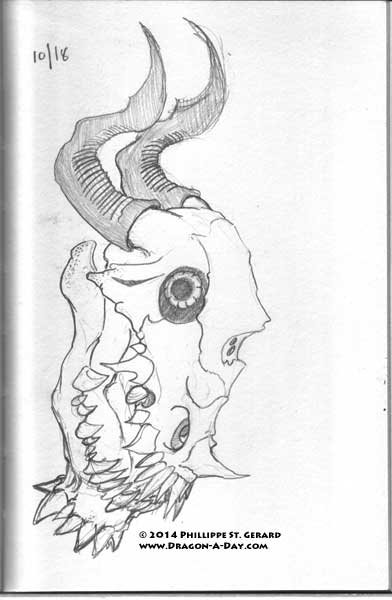 I’m a little too tired and a little too unfamiliar with how bones work (as  in what additoinal surfaces there should/could be) to go ham on shading it all, but the linework is fairly solid, which makes me happy. The fact that there’s a sclerotic ring in there also makes me happy, though I should probably have put some sort of supporting structure in the orbit. Ah well.