So in addition to my teaching thing today, I stumbled into a last minute freelance gig. I probably should have charged more because of the rush, but I didn’t.

As it was, I spent a little over 4 hours doing things that were not teaching (mainly riding the subway) so that I could do 2 that were, came home, ate a salad and a sandwich while watching an episode of G.I. Joe (don’t judge me, I’m sure you do strange things to decompress), and then went into Late Night freelancing mode. I’m only just coming down now, so it’s a good thing that I drew this on the way home: 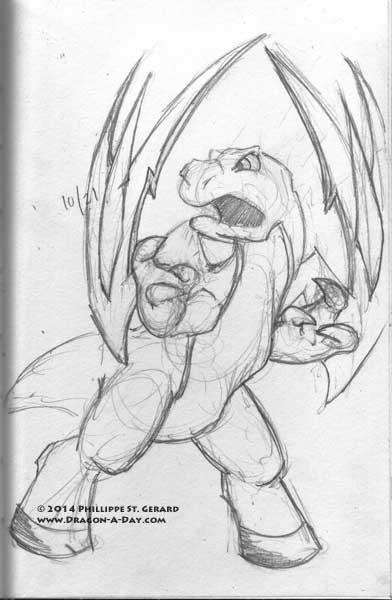 It might be a little too much like a tyrannosaur (which is kind of funny because at first I thought it was going to look a little too much like Charizard with the small arms and all- I actually made them bigger because of that) and not enough like a dragon, but I’m a little too tired to worry about that at the moment. Also, I’d wanted the feet to look metallic, somewhat reminiscent of batteries, but I feel like I ended up with either hooves or fabulous shoes. Probably fabulous hooves. The wings are upside down, like Samael’s from Darksiders, though with the hands where they are, that might not be obvious.

I don’t remember if there was an electric dragon in the missing Pokemon list, (though I know I’ve done a few) but now I’ve done one in something resembling the style.

This entry was posted in Dragon-A-Day, Online, personal and tagged dragon, Pokemon, stuff for other stuff, what makes a dragon, work. Bookmark the permalink.