I found myself with a lot of free time by myself, so I ended up watching a lot of painting shows on Florida’s version of PBS. EDIT: nevermind, I found them: Paint This with Jerry Yarnell, Best of Simply Painting with Frank Clarke, and Beauty of Oil Painting with Gary and Kathwren Jenkins (In this case, just Gary) (thanks, Google) because I only saw one episode of Bob Ross, but I saw several hours of a couple of other painters that were really entertaining and more than a bit inspiring.

Anyhow, while chewing my way through too many episodes of Storage Wars (I was mesmerized by the new buyers, I’m not ashamed to admit) after watching Gary Jenkins paint a goldfish I had them on the brain and drew this. I’m not sure how “dragony” it is, but that’s ground I’ve walked over a whole lot in the past and don’t feel like going into right now: 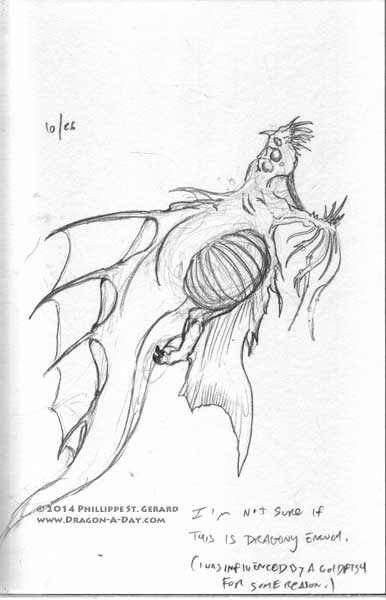 “I’m not sure if this is dragony enough. (I was influenced by a goldfish for some reason.)”

This entry was posted in anatomy, Dragon-A-Day, Online, Sketch and tagged dragon, marine, too many eyes, what makes a dragon. Bookmark the permalink.