These, along with a host of other semi-recurrent faces** (probably including all the legendaries) have one thing in common (aside from being dragons; that’s pretty much a given)- they’re all male. I only mention this because my girlfriend pointed it out, with the caveat that the blog is largely autobiographical, so it made sense. That having been said, I still find it odd because there are some (not loads, but some) great female dragons in pop culture, so I can’t help but wonder if she’s right.

I find it mildly embarrassing that I’m (apparently) so out of touch with my feminine side, but now feel highly self-conscious about it. I’m not even sure what to do- if I suddenly pull a clearly girl-dragon out of my hat, then I’m doing it because I haven’t. If I don’t, then I’m doing more of the same: 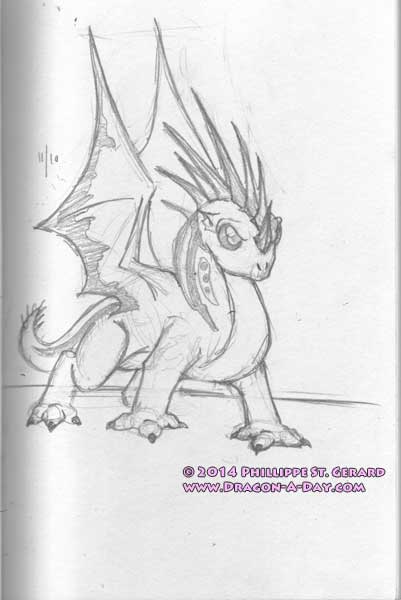 Not gonna lie; I couldn’t get the thought of “oh man, now I need a lady dragon who’s not my girlfriend” out of my head, so I guess this here’s a girl. Dunno if I can readily replicate her, so that might be a moot point, but even that notwithstanding, the idea of what would make her more obviously female came to mind as well, as well as the question “does it really matter?” Because any embodiment only comes from what I tell you, so she could have a long, flowy mustache and as long as I insist that she’s a lady as well as a dragon, goblins is always right in Mercadia.

But I think she’s kind of cute, in a punk kind of way. She might stick around.

*I don’t recall engendering these, though I know they’ve spoken at times. It could stand to reason that some of them might be male and some might be female, though the question of what gender an elemental catastrophe is seems irrelevant.

**I feel like some, if not all of the Grinning dragons have been female, especially those that have showed up in “draconic wisdom” posts of old, but I’ve never explicitly stated it, so…

This entry was posted in Dragon-A-Day, Online, personal, Request Line, Sketch and tagged dragon, sexual dimorphism, what makes a dragon. Bookmark the permalink.