I know I’ve mentioned the students in my afterschool class a couple times in this space, even called them urchins (which is entirely appropriate, though not always gender accurate, by the way) at times.

Truth is, I like them and now that I’m done with the program for the forseeable future, I’ll miss them (but not the schlepp out to the Bronx and back). Since we had our Big Exhibition on Wednesday, today was sort of an Ask Me Anything, where the kids got to ask about how to draw things, or go over techniques we’d discussed in previous sessions.

So naturally, on the day when it’s supposed to be this big fun sandbox adventure, only two students per session showed up.

Anyhow, I told you all that so I could tell you this: There’s this kid, a late addition to the class, named Luis. Luis is an exceptionally well-behaved and enthusiastic student, only acting up when he gets caught up in other students’ shenanigans. Luis’ mom always comes to pick him up ~20 minutes before the class is supposed to end, and each time, he’s visibly disappointed about it. He even thanked me for being there, which in the thick of urchin-wrangling was a welcome respite.

So we’re there, Me, Luis, and another student, Aiden (also very enthusiastic about the class, but very easily distracted), and I present them with the “hey, let’s do something that you guys wanna do” and Luis’ immediate response is to suggest “something that Aiden would like. ”

So we drew Goku for 15 minutes.

While Aiden worked on the finer details of his favorite character (pretty much everything he’s done has been based at least a little bit on Dragon Ball Z), I had a conversation with Luis:

So a bit of Googling later (another teacher who was hanging out in my room for reasons I still don’t quite understand helped out, because I couldn’t spell it), and we found this: 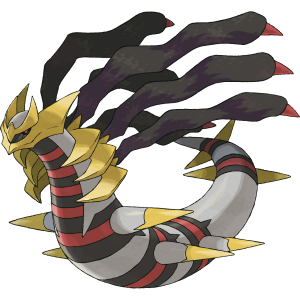 And I did my best to show/explain how I would draw it, but forgot to take pictures of what we drew because the teacher whose room we were in came in and pitched a fit (because I had drawn on her whiteboard), then Luis had to leave simultaneously as this other kid came from out of nowhere and proceeded to derail the session because of a severe lack of fucks.

Anyhow, the above drawing of Giratina (which as far as I can tell is an official piece of game art) is kind of a Bad Drawing™. Even though I was able to teach Luis about how to draw objects overlapping one another, the… neck claws don’t really seem to work (not really enough neck, or maybe it’s the angle- maybe they should be at a different angle? I don’t know), and the right side of the mask/helmet is weird, which made it harder than it should have been to reproduce.

Even as I sit here, scrolling through countless fan-made and (presumably) official images of the creature, all I can say about the two-layered gold headdress/mantle/horn combo is that it just doesn’t work, because when it’s seen from the front, it changes to something else, becoming a wide and flat collar instead of a pair of fins like in the image above. A little more digging around for real-world toy images confirms this further, so at minutes to midnight, I’m at something of a loss as to what to do. I had planned to draw it, but now I’m not sure how to do that.

Update: Some hour+ later, I came up with this. If only I were going to see Luis again so I could show him. Sigh: 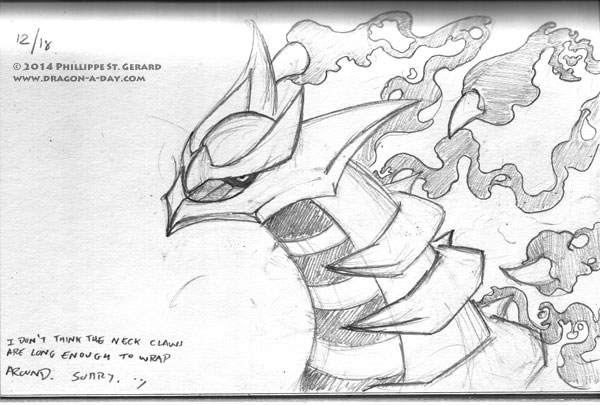