So I was tired and maybe under-caloried again with no idea what to  do. Fortunately the good people at artprompts.org were kind enough to prompt me to draw

A bit of Googling around led me to this list of bats, which made me realize that I ought to look past the scaly and slimy kingdoms for influences/references; pretty much all of them had at least a few dragony qualities to them. In the end, I picked the Frog-Eating bat. 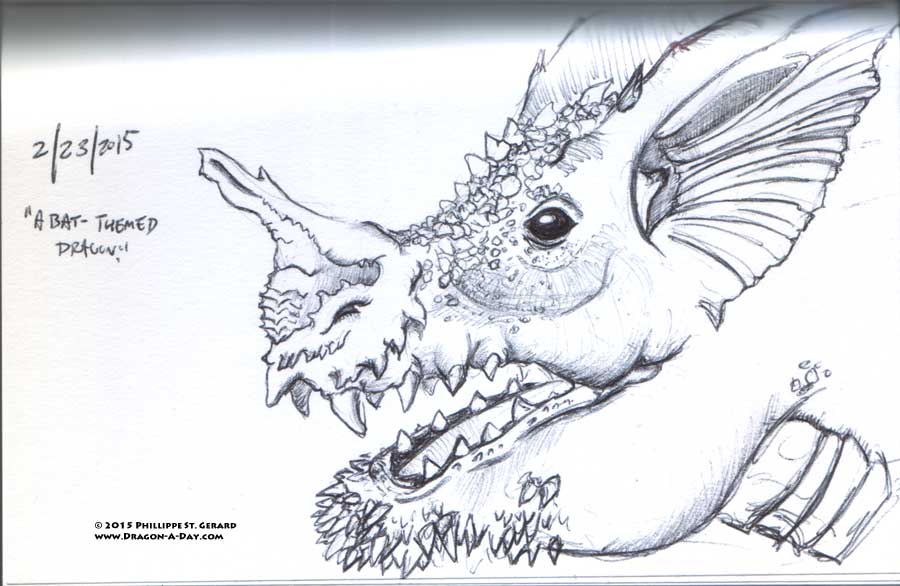 At first, I kind of rushed into it, but I tried to avoid doing the same thing I did with the iguana-influenced dragon of a little more than a week ago (especially since the bat isn’t even a reptile), and sought that happy medium between reference and imagination.

If I hadn’t had to finish this in a single night, I would have worked it up a lot more- the area around the eye and the corner of the jaw really makes me happy with its depth. But I’m super-tired now and should get off to bed, so that’s as far as it will go, I’m afraid.

This entry was posted in Dragon-A-Day, Online, Sketch and tagged comparative anatomy, dragon, other websites, pens, what makes a dragon. Bookmark the permalink.