One Page, One Dragon. That’s the way that it’s been around here for quite some time. I come up with an idea, try to come up with some sort of decent composition/framing for my solitary dragon and execute.

There’s been a few exceptions to this rule, but the page/dragon relationship is largely monogamous, which I hadn’t even realized until my girlfriend mentioned last night that my dragons don’t really interact with each other, and seeing two on the same page was interesting to see.

In all fairness, sometimes it can be hard to place a single dragon on the page; add a second one and then the bits that make it interesting start blocking out the bits that made the first one interesting, lather, rinse, repeat. Drawing in ink only compounds this problem, as it’s harder to correct misplaced limbs/wings/whathaveyou: 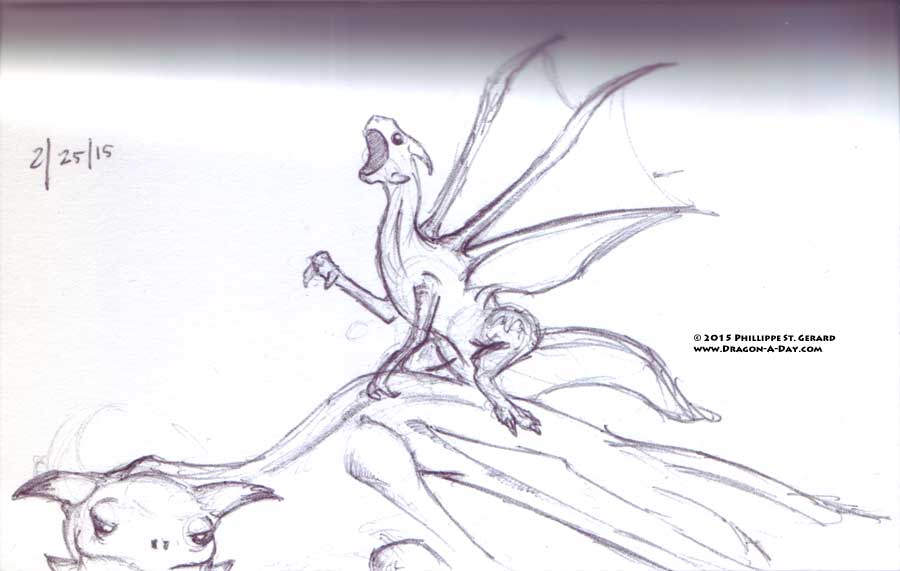 Perhaps in the spirit of the theme of multiple dragons, I ended up drawing this twice. The first time, I didn’t know what I wanted to draw, really; I had been looking at pictures of animals lying together and nothing was clicking, but I tried to draw the adult dragon in a pose similar to a reclining cat photo I’d found. It didn’t work at all, so instead of forcing it I opted to start over, especially since I wasn’t 100% sure how the dragons should even look- if you can’t tell, this, as well as the sketch above feature the dragon(s) from last night: 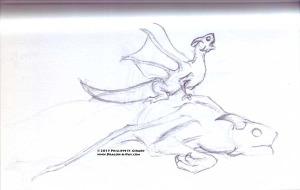