So on a whim, I decided to look up the range of where Brontosaurus fossils have been found. Googling “Brontosaurus range” didn’t turn up much, but “Brontosaurus rage” produced this little gem (EDIT: WordPress and Google Books don’t seem to like each other tonight. Here is the direct link instead of the embed, and you can also consider buying the book via Amazon).

It’s a pretty evocative piece of prose, though perhaps it goes a bit much into the emotions layered on top of a simple vocalization. BUT, the idea that a creature like the Brontosaurus might be terrifying because of its sheer size and the fact that a casual action for it is a catastrophic one for something on the scale of a human being is an interesting one, especially when considering that it might be a relation of/inspiration for the Grootslang. 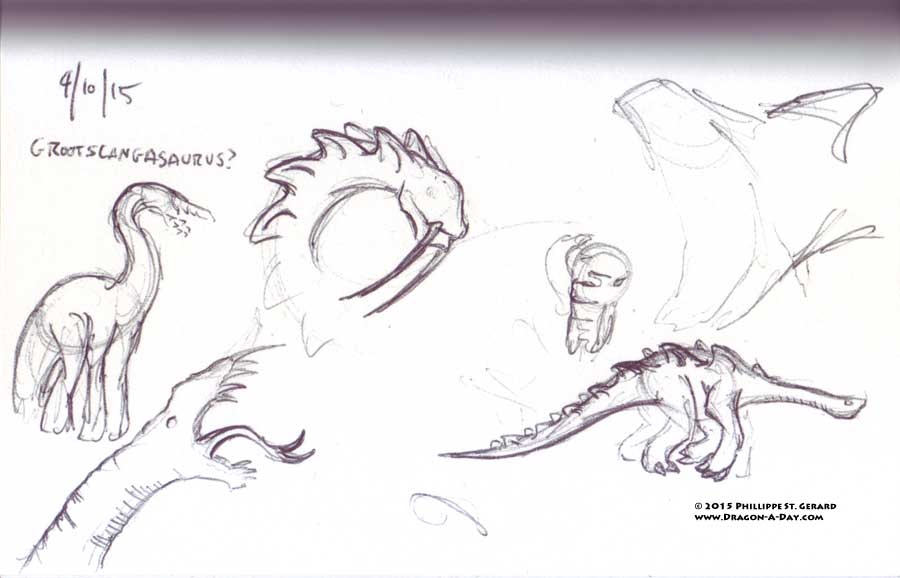 I wrestled a bit with the idea of differentiating it from a dinosaur, though the classic sauropod shape is already reminiscent of serpent and elephant, so it was a toughie. I’m not really there yet, but I’m wrung out from staying up late playing Smash Up last night. I like the stegosaurus-like spikes/fins down the back, they’re like/could become elephant ears, but I’m not sure what to do about the head shape at the moment.

I’ll dream on it for now and get back to you when I’m a bit more lucid.