I did some warmup and got all hyped to draw, but had no idea what to draw. So I grabbed a nearby sketchbook (I had pulled some of them out of storage to find a particular sketch and now they are running wild and free around the apartment) and opened it to a random page deciding that I would draw what or whomever resided on said page.

I found this dragon: 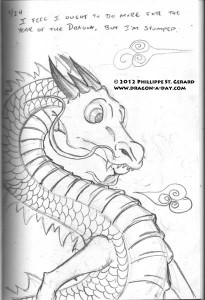 so the race to draw a Lung was on.

Some part of me wanted to do a bit of a deviation form my more strictly reptilian lung; and said part idly wondered about homogenization of culture as even I had wandered somewhat far afield from the chimeric appearance that they’re supposed to have. However, I didn’t really want to get bogged down in an internet search for animal bits, so I tried to base it at least in part on what I remembered them as having, which mainly turned out to be elk-like horns and lion-ish manes/faces. I’m still pretty happy with what I did, mind you, just that it was probably not as dragon dance inspired as I had originally set out:

The mane got a little out of hand and I opted to let it swallow up the rest of the neck instead of making it into a Bad Drawing, but there’s a lot of character in that face.