I’m sure I’ve said it before but it’s nights like this where I wish i gave myself more than one day to complete a drawing instead of feeling like I need to leave the previous days’ pieces alone.

I started with the curve of the pupil because I didn’t even want to draw but knew I needed to before it got too late and I ended up staying up later than I wanted to because I had to push through it. That curve became a large staring eye, and before I knew it I was trying to figure out the topography of alligator-like teeth and layered skin around an eye socket. I had a rudimentary idea for a spiky brow ridge, but wasn’t sure how it would line up: 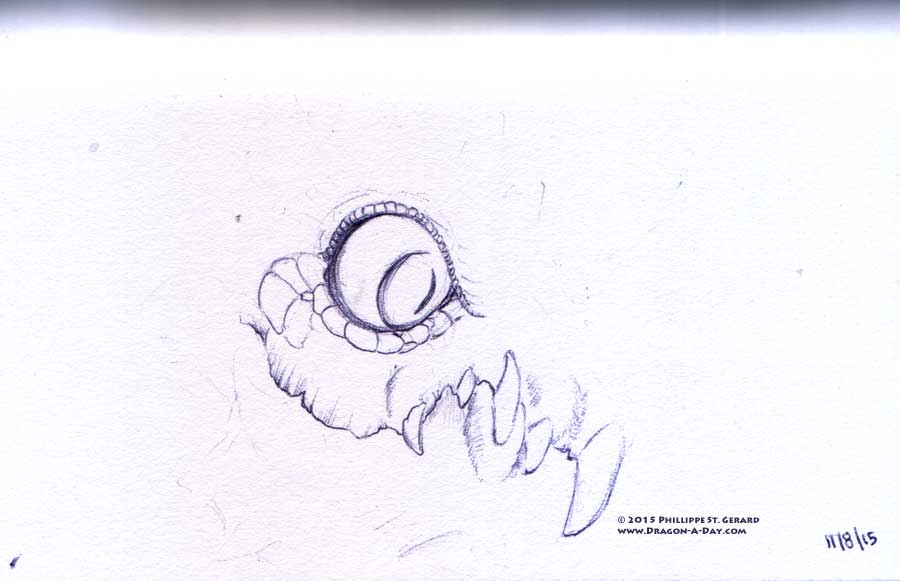 Then I stopped for dinner (though even as I was getting ready to stop, I was feeling like this wasn’t going to get anyplace that would feel good to scan as a finished piece) and resumed. I struggled with the feeling of urgency- I had to do something  finished, that would show an equivalent amount of polish as this first stage…

Finally, I admitted to myself that I didn’t feel comfortable rushing it and tonight’s post would be about the struggle to complete it. There are some marks that tried to be completed thoughts but instead just kind of were half-formed and unnecessary (looking at you, brow ridge):

There’s a good chance that I will revisit it this week, though I’m not sure when yet.