I’ve been listening to Sabaton all week, and was thinking about doing something with the War Dragons, but then I remembered that it was the 13th today.

I guess it’d be too easy (or simplistic, maybe) to do a Jason Voorhees dragon, so I gave myself something a lot harder than it ought to have been to do, considering the lack of consistent references out there:

Not only did I have little idea of how to draw a burn victim, nor how the musculature of a draconic skull would work, Googling “freddy kreuger glove” fails to return two images that look the same. Nevertheless, I persisted in this foolish quest, right until I realized that there was no decent-looking solution to the fact that the glove (he only has one) is on his right hand. and the way that I had turned the head and neck was so extreme, it would have to end up resembling some sort of contortionist demonstration.

So, thus disheartened and fatigued, I went on to do this slightly less-inspired image. 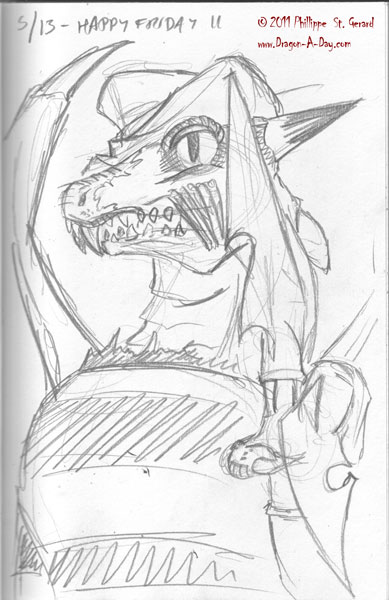 I don’t know what it is, he seems to look more crocodilian than anything else. I think that it’s the hat. I tried to give him some attitude, because although I’ve never seen any of the original Freddy movies (I’ve seen Freddy vs. Jason, and that’s all I really need to see, thank you), I know (read as: think) that he’s kind of  a cocky, punchline-y psychopath.

The face is not nearly as good as the previous one, because I knew that I wasn’t going to be able to recapture that bottled lightning that I had in the first, but I pressed on anyway, and this is the result. It’s not splendid, but hopefully gets the point across.