A pencil makes only one color- roughly 80% grey. Varying levels of pressure can cause it to create lighter or darker greys; enough saturation can create black. This distinction is somewhat necessary because it relates to the problem that I am having while worknig on tonight’s piece.

I don’t know if it’s a limitation of the technology , which has never really worked the way that I wanted/expected it to (I’m working with an Intuos2 Platinum from… jeez, maybe 10 years ago now?), or just me not knowing what to do or how to do it, but sketching entirely on the computer is proving to be more difficult than I would really like. The drawing part is fine; it’s the things that I instinctually expect to happen (i.e.: pressure-sensitive color gradations) that are throwing me.

To make the long story (slightly) less long, I didn’t feel like doing the sketch-cleanup-paint process that I talked about doing last week, so I instead decided to start from scratch on the computer, hence the dilemma that I described above. Some abortive attempts at making my own Photoshop brushes and changing my Paintbrush Tool’s settings later, I ended up with this: 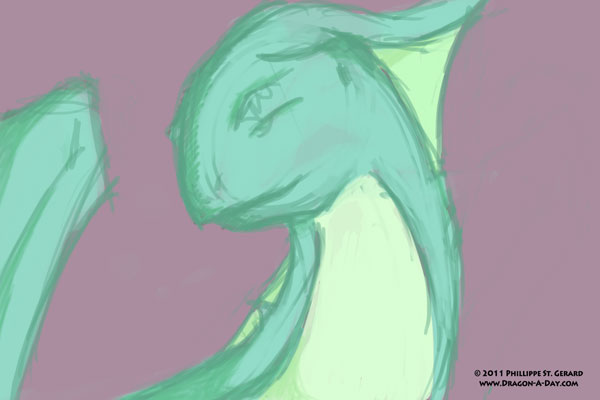 I’m happy that I tried to do shadows with an actual color instead of multiplied grey, but I’m not thrilled about the very obvious brush strokes, nor the reliance on my sketching. I had a few other not-as-good tries that started out as clots of green pixels and pretty much stayed that way.

I guess that’s all for now; I need to go to bed so I can face Monday and its four thugs. Be good, kids.

This entry was posted in Dragon-A-Day, Speedpaint Sunday and tagged Photoshop, technique, The Lady. Bookmark the permalink.