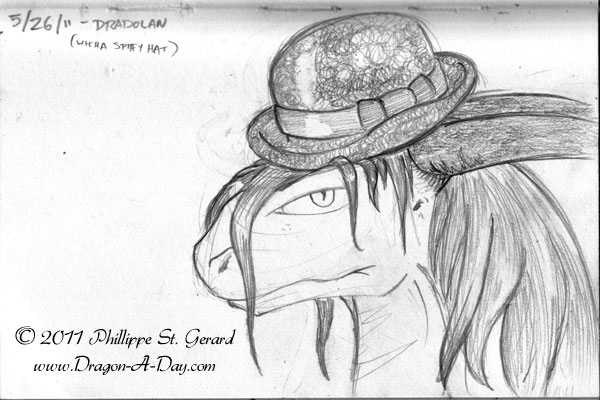 It’s Dradolan, having reentered my draconity queue. And, like Malibu Stacy, he’s got a new hat. He changed his avatar over there to include a bowler hat, which was his first mistake. Those that know me in real life know I am a fan of Fancy Hats, and as I rarely have opportunities to wear them, I will usually pounce on one if it should present its soft underbelly.

Anyhow, on to the self-critique: I like the way that I got the dark mane, the black horns and the (out of necessity, unless you’re the modern-day Riddler, who thinks he’s too good for spandex) black bowler hat to live together in relative peace in my sketchbook (the scan result might not be so kind; my laptop monitor needs to be calibrated) through judicious use of texture and pressure. I gave his face a little more structure than the first try, though his muzzle could probably have been a little longer, and I probably could have done more with the highlighting, but I like it.

I hope Dradolan enjoys it; now I’m off to bed.