I saw a cardinal from my window today.I was later told that it was a sign of good luck to see one.

Thinking on what the bird might portend and sketching its face later today made me think that most of my dragons are either a uniform color, or I’m just stupendously lazy (it’s the former). Very rarely have any of them had any real distinctive markings (though obvious exceptions exist); it’s just something that I never really thought of for some reason. It’s also mildly embarrassing.

So, thus chagrined, I came up with this: 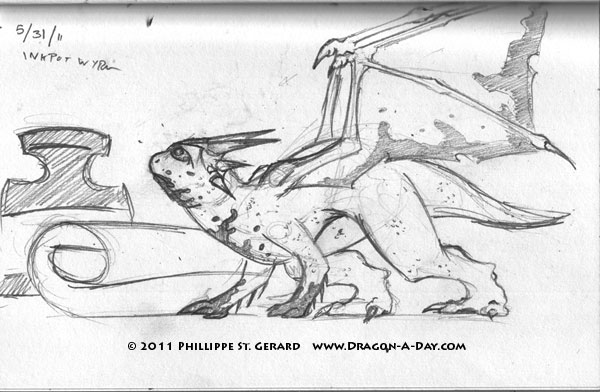 Inkpot Wyrms are normally a uniform light grey, except for the speckling on their front portions, particularly the foreclaws and chests- true to their common name among humanoids, the dragon looks like it did nothing so much as frolic in a pot of ink. Dark sepia tones and blacks are most common, but speckles of blue, red, and rarest of all, green are known to exist.

Despite its common name, the Inkpot Wyrm is not known to enjoy books or writing more than any other dragon, and will actually take offense quickly if it is suggested that the dragon offer aid or critique on one’s novel.

This entry was posted in Dragon-A-Day, Online, Sketch and tagged coloring, Inkpot. Bookmark the permalink.