Not feeling especially inspired tonight, so I decided to try and challenge myself to do something unlike my usual fare.

I thought about it for awhile, then I decided to try and do something like what this guy did with some of his 55 dragon concepts. While I’m not a huge fan of a lot of them, some of his head shapes are very different from the ones that I usually lean towards, and he had an actual lizard as partial inspiration, so that lent a bit of weight to my decision. 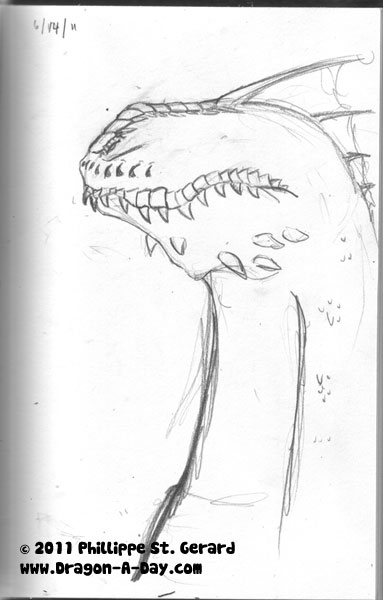 Anyhoo, about 15 minutes later, I had something that looked like a sock puppet. I couldn’t wrap my head around the bone structure of its head, so placing scales/plates got hard after the more obvious places were filled in. I’m not happy with this, but it’s later than it ought to be and I got places to be Tuesday morning.

This entry was posted in anatomy, Dragon-A-Day, Online, personal, Sketch and tagged Muppet, other websites, socklike. Bookmark the permalink.