It was a pretty hectic day of Family Emergencies, but everyone is okay. The Fiancee said I was “her rock” due to my unflappability in a crisis, so it seems reasonable that I would draw a stick figure:

In hindsight, I probably should have put some stick horns/fins on this dragon, but I was a little more concerned with the question of does a stick figure dragon have a circular head or not.

And as an aside: does numbering and nomenclature matter? “The Resurrection” has been going on since April- how long does it keep going? And even when it stops, do we go back to “Dragon-A-Day? I’m very much undecided.

I don’t know why the visual shorthand for all-out running involves the arms stuck straight out, but it sells it. Anyhow, I need some sleep.

I don’t know if I’ll ever get that backlog posted, but I’m going to try to post regularly again.

There’s a lot of birthdays in May lately, and my lady’s is today. I made a fuss over her. 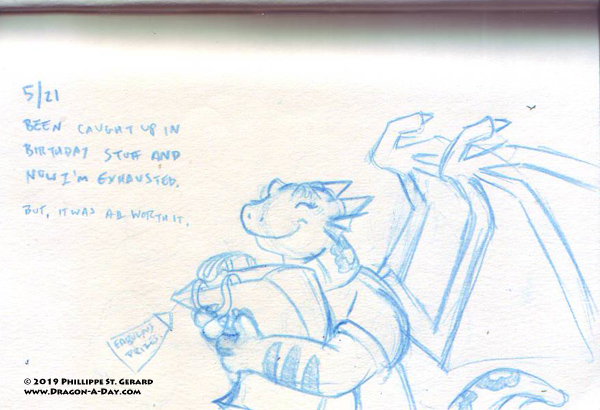 Dragon-A-Day: The Resurrection: Day 22: From (way) Behind. 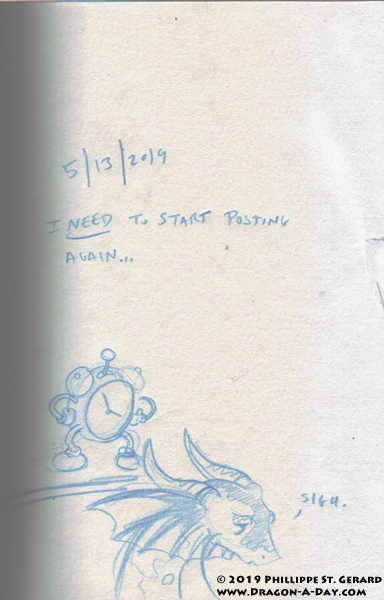 Dragon-A-Day: The Resurrection: Day 12: Past Our Bedtime.

After what felt like the longest game of Commander ever I came home and, while not exactly inspired, I found this sleeping dragon curled up in the page:

I didn’t set out to draw one of The Other Ones (and in fact my tag index is currently broken so I couldn’t just pull them up; I had to do a search), but it seemed like an offshoot, probably just because of the stripes; if that closed eye is button-like, it’s a pretty big button.

Posted in Dragon-A-Day, Resurection, Sketch | Tagged dragon, sleeping, The Other Ones | Leave a comment

I should have tried working at my desk- I think I concentrate better there. But instead I sat on the couch and tried to draw through episodes of Cheers. It didn’t work, partly because I am really very tired and partly because I decided to try to draw a dragon bursting from the ground and didn’t really know how to handle the topsoil and small buildings my mind’s eye wanted to include.

So I gave up and phoned this in, which even my scanner didn’t feel like working on: 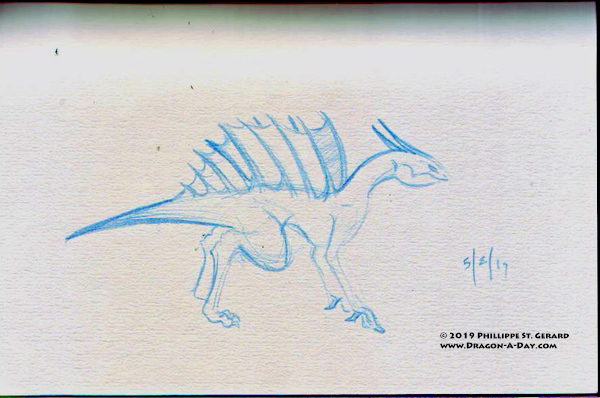 Working from home later than I should have found me uninspired and sleepy. A couple flicks of the random word generator had the unsuitable word “silage,” the interesting word “evildoer,” and the winning word “pinup.”

Problem was, I needed to look up poses, because they are a thing, even going so far as to say something about your personality based on your favorite (I couldn’t decide). There was also the question of do I play it straight and do a not-quite-safe-for work drawing or the (potentially) humorous idea of a non-anthropomorphic dragon stuffed into a bikini or other fetching outfit and taking the pose, possibly against their will?

In the end, I split the difference. 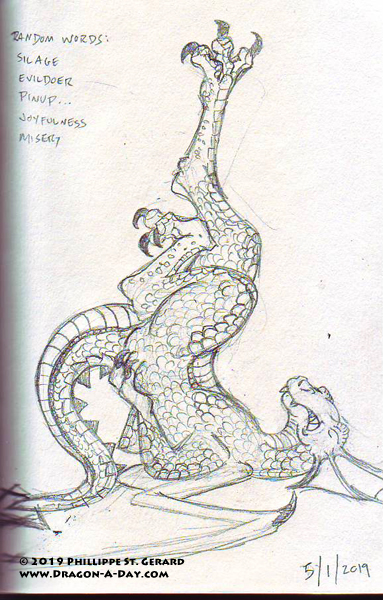 I probably should have put more time into the scales, but I added them mainly because I kept drawing through trying to get the pose right and he was in this strange no-man’s-lad of looking unfinished  and too busy. The scales on the backs of the arms and the fronts of the legs are fine; it’s the filler elsewhere that kind of bugs me, but I’m trying to get back on a normal sleep schedule, so I didn’t want to stay up much later than I needed to.