So after trying to get to bed (I had a bunch of stuff on my mind and could not fall asleep, more’s the pity) early last night, I slept in today, and stayed up late because of the Meeting That Would Not End. This isn’t to say that the meeting wasn’t useful, but it started and ran late, which I didn’t need.

I would probably have drawn tonight’s dragon in said meeting, but I was taking minutes, and could not  devote that kind of energy to something like that. Sigh. I did do a little bit of doodling in the margins of the Agenda, to keep myself sane.

Anyhow, tonight’s dragon is based loosely on a random doodle I did. 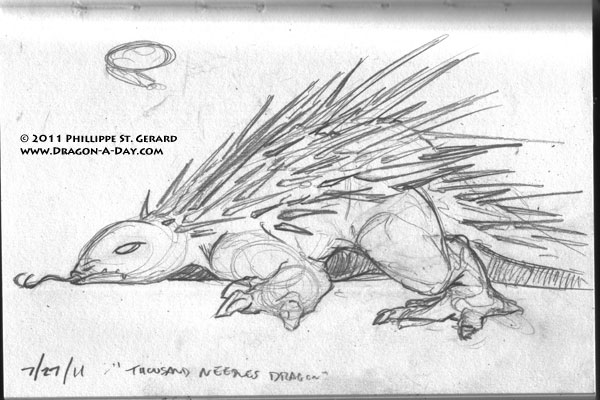 PS: Thinking about the name I gave this dragon reminded me of the ever popular Cactuar, as seen here:

This entry was posted in anatomy, damnit, Dragon-A-Day, Online, personal, Sketch and tagged stuff for other stuff, thousand needles, work. Bookmark the permalink.