There’s not a lot written in The Bible about Behemoth that one can readily draw inspiration from, which made me a little sad. By contrast, Leviathan gets 34 lines, an entire chapter versus the comparative 9-line footnote about Behemoth at the end of Job 40.

So from a design standpoint, I guess I need to go mine other sources, though I would prefer to keep my references to that which I’m more familiar with (note that my Leviathan has no horns, despite having been described as having such in later Jewish literature, for example.)

At any rate, though rifling through several different translations of Job 40.15-24 seems to imply that Behemoth’s nose is pierced (as if with a ring, like a bull) as opposed to his nose doing the piercing, I liked the idea of this enormous, ceretopsian-esque monster lumbering through biblical times, though I’m not sure how big he is, since lotus trees and reeds are able to conceal him under their shadows. 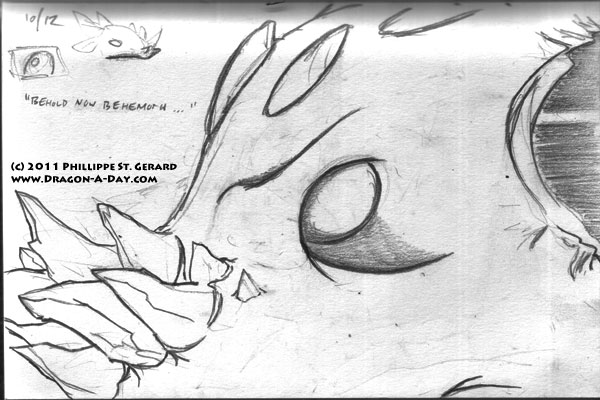 This entry was posted in Dragon-A-Day, Fan Art, Online, Sketch and tagged Behemoth, Leviathan, The Bible. Bookmark the permalink.