I went to the NY Comic Con today, only for an hour and a half. It was really all I needed; I’m kind of jaded when it comes to conventions.

Anyhow, I did see something of note; while wandering through Artists’ Alley, someone stopped me saying “hey, do you like dragons?” I would like to think that I replied “Why yes, I do indeed, my good sir,” but I’m prety sure my response was jsut a mildly confused “yes.”

He then pulled out a comic book and a poster, proceeded to autograph them both and handed them to me, explaining that they were launching their book this weekend and that I should tell a friend.

So I’m telling you. The Dragons of Blizzard Island, was a pretty exciting read, though I’m not sure about the dragon part- not yet anyway. I’d probably have done some fan art, but there wasn’t enough dragon action to warrant it; the humans definitely stole the show in Book one, and (from a storyline perspective, anyhow)  with good reason.

At any rate, I’ve been sitting and staring at my sketchbook mulling over the events of today as well as the tomorrow to come, and this fell out: 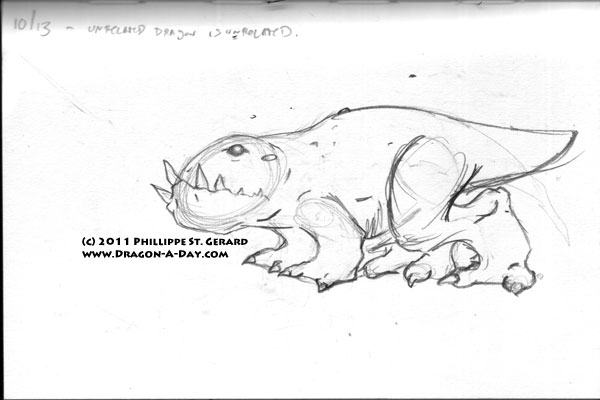 Oddly enough it is vaguely reminiscent of the dragons I saw in Dragons of Blizzard Island, but not so much as to really be dubbed “fan art.”

That’s all I’ve got for you tonight. I’ll see you tomorrow.