So six months and 19 days ago, my Second Edition D&D group was ambushed by a red dragon, and narrowly avoided a Total Party Kill situation.

Several real-world months before that, one of the characters, a warrior named (and I apologize for misspelling it, Slick) Bracchus Valerius, found a sword that was +2 versus dragons, and +4 versus white dragons specifically, on top of dealing double damage to them. For those of you who don’t speak Nerd, in a nutshell, it’s a dragon-slaying sword. Since white dragons have an affinity for cold, Bracchus named the sword “Spring’s Thaw.”

Anyhoo, fast-forward to this Friday night, we were in a tower that was apparently at the very outermost edge of a white dragon’s territory, just as said dragon had shown up and decided to try to attack said tower, like he did every few months, according to the locals.

While my druid was trying to get everyone to calm down and make A Plan, Bracchus drew his white dragon-slaying knife and ran off to engage the dragon. Not wanting our companion to get eaten all by himself, the rest of us followed him, some more hesitantly than others.

The dragon heard Bracchus sneaking around and unleashed its breath weapon, a cone of killing frost, which in fact nearly killed Bracchus outright, along with seriously wounding another warrior, Antonio, and nearly taking out Lief, the wizard, who had wisely concealed himself partially behind a trapdoor as he cast a spell.

And thusly, the battle was joined. Spring’s Thaw did hurt the dragon pretty badly, but he dice did not favor the bold warrior, instead he was slain by the Very Old white dragon (mostly because he did a great job of separating himself from the healers in the group), but nevertheless swiftly avenged by his companions.

Which is where the inspiration for tonight’s sketch comes from. While it draws upon the D&D 3.5 white dragon design (mostly because the Monstrous Manual was in use by the DM at the time), the spirit is still the same: 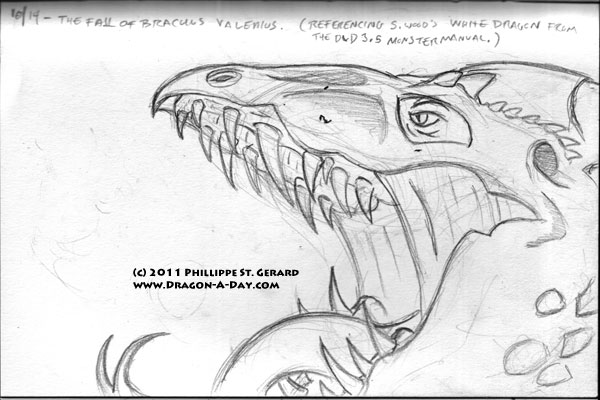 I’d originally intended to draw Bracchus fighting the wyrm, but I wasn’t sure of the scale, and didn’t want to get that messed up- it turned out that the dragon was 70 feet long with perhaps 50 feet of tail behind it, so there was a goodly chance that I’d have flubbed it, so go me.

The gumline was the hardest thing to replicate; though the openings in the mask weren’t exactly easy to pull off- they just kept looking … strange. But, on the whole, I’m happy with it.

Oh, and for those of you wondering: thanks to the tower’s occupant being a powerful cleric, Bracchus was restored to life, but it was still kind of a touchy situation.