Last week I went to a special-interest meeting at my local chapter of the Graphic Artists Guild. It was the Comics and Cartoons Group, and there was a bit of a portfolio share. I had forgotten my portfolio, so I passed around my sketchbook.

As usual, people were impressed by the discipline that it apparently takes to do something every day (though personally, I don’t think that it counts if it’s something that you like to do; there are many other things that I should be doing every day that I shirk), but when one of the other comics enthusiasts came to the page that I’d first sketched the cockatrice on, no one in the room knew why I had drawn a chicken in my Dragon-A-Day sketchbook.

The general response was “What’s this? A chicken-dragon?” I tried to explain that it was in fact, a cockatrice, I got a roomful of blank stares. I tried to explain the old-timey origins of the creature, but no one understood, and it only got worse when I offhandedly mentioned the basilisk.

I guess I should thank Gary Gygax (among many others) for helping me become so (for lack of a better word) worldly; I know that much of my understanding oflegendary creatures comes from being so well-read in the sword and sorcery genre and all its derivatives.

And yet, despite this treasure trove of esoteric knowledge I seem to have, it always seems that there is more to be discovered. While re-reading the Wikipedia entry on the cockatrice, I found the Ichneumon, which until now I had only thought to be a type of wasp. Either it’s the cockatrice, or some sort of dragon-hating otter (It could also be a mongoose, but otters are more entertaining of an idea): 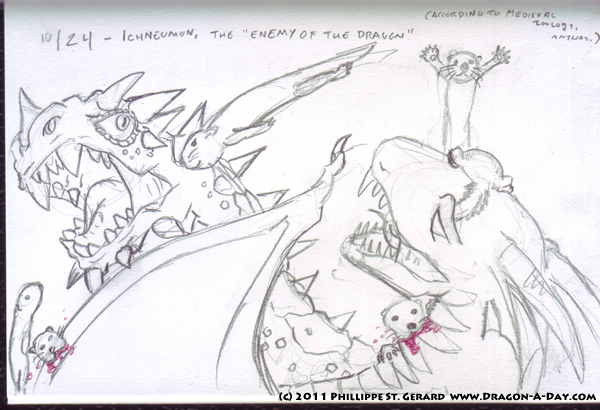 Those of you long familiar with Dragon-A-Day will recognize the hapless forest dragon being savaged by a few of the tiny beasts, which have apparently hidden themselves under some mud to the point that the poor creature could not see them coming.

I also just realized that I’ve been posting a significant portion of my links incorrectly. When the blog migrated from its original location, all the self-referential links were absolute links, and they still pointed to the old locations, which mostly no longer exist. In my attempt to fix this, I have created a similar problem. Sigh.  I guess I’m going to have to take a longish weekend or something and go back through all of the posts and fix them.

Or steal an intern.