I was pleased with Monday night’s sketch, in terms of its content as well as discovering the random animal that inspired it. Originally, the dragon in the left-hand corner was going to be the focus of the drawing, but then I remembered the hapless forest dragon, and it kind of stole the show.

However, I liked the design of the dragon on the left, and decided to revisit it briefly on Tuesday night (newfangled delayed-blast posting has me tripping over my phrasing so that it makes sense as I write this): 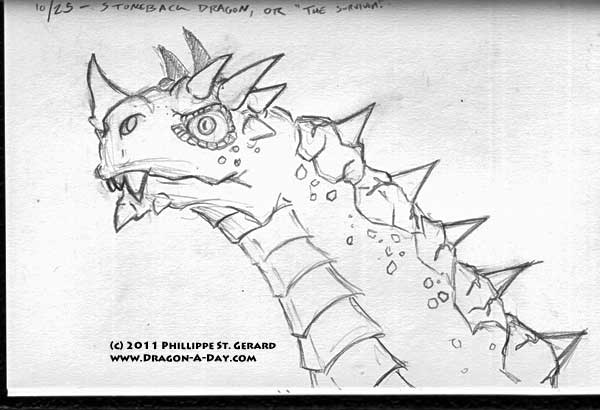 about two-thirds of the way through, I realized that A): I didn’t know exactly what I wanted to do with the stone-ish plates on the back, and B): it would be cooler if they had magma running from the spikes. I think I need to go back and organize the plates a bit better, though the magma will probably stay one way or the other.

I don’t know for sure if this dragon can fly.

This entry was posted in Dragon-A-Day, Online, Sketch and tagged Rule of Cool, stoneback. Bookmark the permalink.