Not that I had any time to do research or anything, but I was thinking about Cirein Croin and the old question of “what makes a dragon?” This is a little more relevant for specific creatures like Cirein Croin because I don’t want to run around willy-nilly co-opting legendary monsters to slake my artistic curiosity.

While it could easily be said that any large reptilian creature could be a dragon, I don’t want to paint with such a broad brush- I’ll be filling the blog with Tyrannosaurus sketches in a week.

Within the confines of this blog, we’ve already established that dragons need not have wings, or breathe fire, so that’s out. Intelligence is not always a factor, though it could be argued that a dragon has a different kind of intelligence than that possessed by strutting humanoids, especially among those types of dragons that do not speak.

All that having been said, I’m still not sure if Criein Croin counts as a dragon or if it is a sea serpent. The fact that Leviathan breathes fire makes me think that he is a dragon; Criein Croin sounds like an overgrown shape-changing sea snake.

And that’s okay.  Nevertheless, I do not know how to define it. For the time being, I will continue to appropriate it: 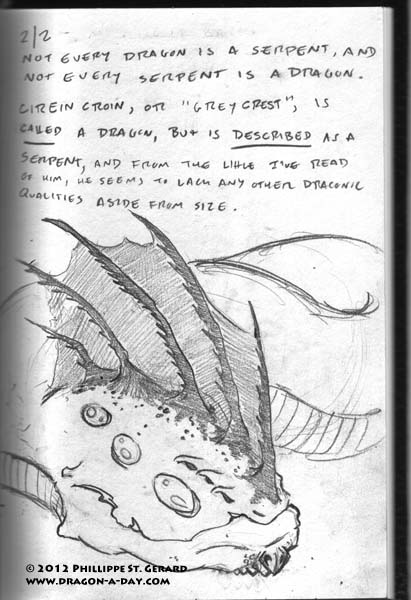 Not every dragon is a serpent, and not every serpent is a dragon. Cirein Croin, or “Grey Crest,” is called a dragon, but is described as a serpent, and from the little I’ve read of him, he seems to lack any other draconic qualities aside from size.

After thinking on its habit of eating fishermen, I decided that the crest might be the first thing that its victims see when it starts to breach (“Grey Crest! Grey Crest!”), or perhaps like some of the descriptions I’ve heard about kelpies, even when it transforms, it retains a certain quality- in this case, the tall grey fin. I figure the rest of it is milk-white (or at least until I get some other description or reasoning), but mostly for contrast. And the three eyes/nostrils just kind of got thrown in. They might not stay.

Oh, and Happy Groundhog Day. I’d honestly forgotten about it until I sat down to type this out, otherwise, I’d probably have done a draconic groundhog sketch.

This entry was posted in anatomy, Dragon-A-Day, Online, Sketch and tagged Cirein Croin, legendary, what makes a dragon. Bookmark the permalink.