Last week, someone offhandedly mentioned there were dragons prevalent in Scottish folklore. Not being especially educated in such things, I turned to my stalwart friend, The Google, for answers, where I found this page.

Although it features Scott Wood’s Fang Dragon as its headline, the article had some names that led to further searching. Cirein Croin has apparently been co-opted by the Final Fantasy cosmology, which has appropriated nearly every legendary monster, beast, hero and dragon I can readily think of, including Leviathan and Bahamut (who I belatedly realize I have never drawn, though I’m not 100% sure he is a dragon outside of the D&D universe), and this was before I lost interest in the series 10 years ago, but I’m not sure if they did it justice, considering that it seems to be a palette-swap of several other monsters in the same game.

Wikipedia has naught but a stub on this mighty creature, which is becoming more like Leviathan as I keep reading about it, with its multi-whale diet, but this site at least gives a little more description. Its name means “Grey Crest,” which is something that I can use. This doesn’t explain if it’s a dragon or even draconic, but it’s something.

According to this page about serpents (not a good sign) in mythology, it turned into a fish (why?) to lure fishermen out so it could eat them… Oka, I give up for now. How about that other dragon, Beithar?

::10 minutes of Googling and Wikipeida-ing later…::

Okay, that was inconclusive. I’m going to have to go look things up in actual books if I want to pursue this Scottish folklore thing any further, because I don’t have any reason to say that Nessie is anything other than one or more plesiosaurs, although I’d love to have the Loch Ness Monster in my camp.The more astute among you will probably remember I’ve had more than a few internal dialogues about the nature of draconity, and this isn’t being solved tonight.

So with that possible resource coming up blank (have you guessed by now that I’m free writing this as I go?) what do I do? 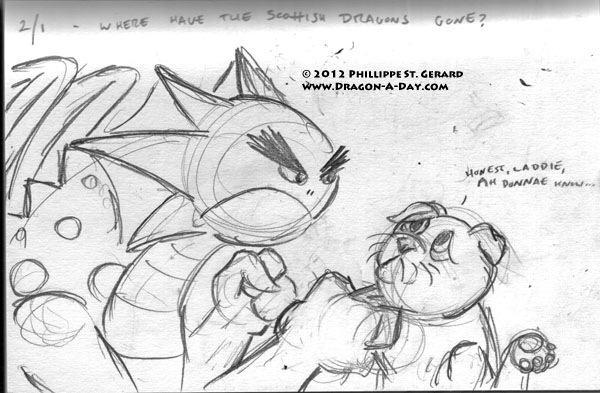 Why start asking the locals, obviously.