So here are some more hasty sketches of tooth modifications for that little dragon wit hthe big (apparently multipurpose) teeth; I was thinking more along the lines of baleen or a flamingo’s beak when I did them: 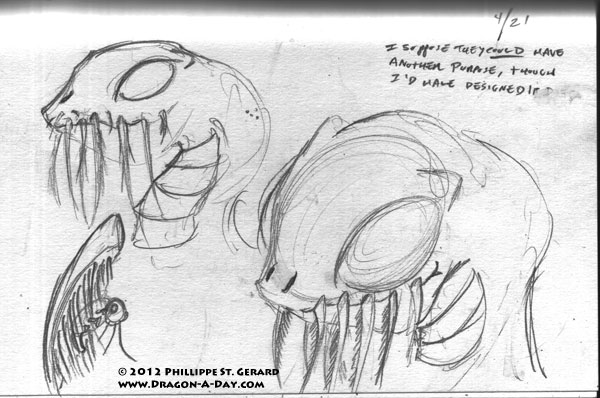 I like the idea, but I think I’m having a mental block around retrofitting this idea to what I’ve already drawn for this dragon, which was pretty clearly some sort of active predator.

That having been said, my draconic menagerie has been a little heavy on apex predators; even if they don’t all live in the same ecology, the idea of every dragon being equipped with a head full of tearing fangs and scything claws narrows the design space considerably. Perhaps I should take more pains to consider the idea of an alternate diet in order to break new ground- there was a period in the offline time (and someday maybe I’ll get around to scanning those) that I played with the idea of a herbivorous dragon, but that was exactly once, and I never came back to it. It’s something to consider for the future.

This entry was posted in anatomy, Dragon-A-Day, Online, Sketch and tagged diet, teeth. Bookmark the permalink.