Some more sexual dimorphism sketches for the Macejaw Dragon; with special emphasis on the female posture: 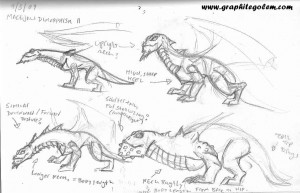 I tried to reflect the way that male and female humans have different shapes and postures while figuring out how the female would carry herself, while still trying to make it similar to the male’s low-slung posture, as well as the major curves in the body- the silhouette should be similar, if not the same (the head shape would make it different, among other things).