Pencils don’t get spyware. Reams of cheap copy paper don’t get malicious software surreptitiously downloaded to them while you accidentally stumble past a shady neighborhood.

There’s something to be said for being an entirely analog artist.

In the hour or so that my computer was running on Saturday night, my computer managed to get infected with two different viruses, according to MacAfee, and I still seem to have a very persistent bit of adware clickjacking the bejeezus out of me. In fact, as I type this, McAfee says it just caught and removed the same virus it said I had twice over the weekend. So, for those of you who comment on these via Facebook, I won’t be responding there until I get this straightened out- no need to complicate things any further.

Needless to say, I haven’t been thinking about dragons that much today. I did think about them, but not enough to come up with anything concept-y. I still needed a dragon for today, so I did draw one, though I’m tired and frustrated, and did not have a productive day today. 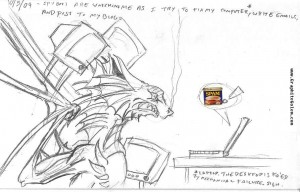 This entry was posted in damnit, Dragon-A-Day, personal and tagged computer, my dragon, spyware. Bookmark the permalink.