After replacing its heart, my desktop has sputtered sullenly back to life. I’m still wrestling with the malware infesting my laptop, but at least we’re functional.

On and off today, I was mulling over the concept of a digital dragon, due to all the computer problems, but ultimately discarded it. I also wanted to do some other form of adaptation like the Macejaw, but didn’t think it past that stage. I remembered trying to draw a mechanical dragon back in my wild and carefree youth, I might even have the sketches somewhere. I remember that it was largely based on anatomy; replacing muscle with cable and pulley and so on, and my understanding of musculature was even worse than it is now, if such a thing can be imagined, so ultimately it was scrapped back then.

Somewhere in my thought process today while coming home from the computer parts store, I came up with a brilliant story about mechanical dragons and other things, but I didn’t write it down, because as soon as I came home, I ran out the door to go elsewhere. I’m sad that I didn’t get it down while it was fresh in my head, but I have the gist of it still, and will probably share it with you tomorrow/later today, because I’m dumb tired at the moment, and it’s crazy late.

As it is, here are some sketches of the mechanical dragon I was thinking of- originally it was supposed to be built for riding, but it somehow became autonomous: 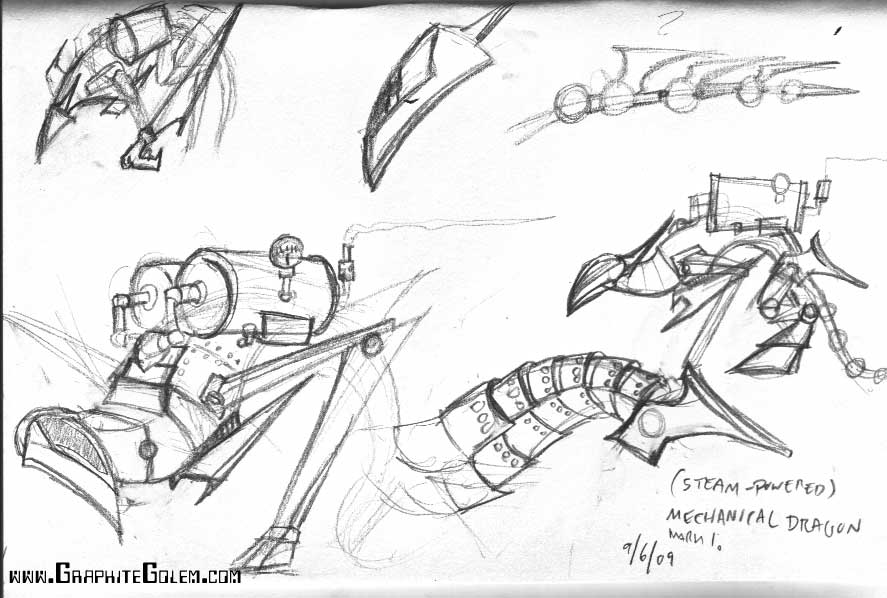