“Went out, played Magic, lost badly and now I’m home.*  Got a long/late day ahead tomorrow, so it’s off to bed (as soon as I finish this.) 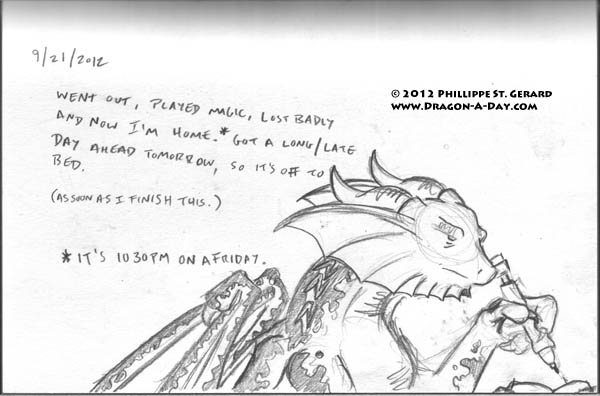 PS: Some of you who follow this blog might be interested in my friend Andy Hopp’s Kickstarter, which ends sometime this weekend (at the time of this writing, there’s about 38 hours left). It’s gathering funds for manufacturing miniatures for his game Low Life, a sort of post-apocalyptic world where snack cakes have evolved into sentient beings, and that’s the simplest facet of his lil’ universe to describe.

The Kickstarter has far surpassed its initial goal, so there’s no pressure to donate, but if you’ve got some disposable income, you can snag a bunch of goal exceeded bonus stuff, and if nothing else, it’s worth the look.

This entry was posted in Dragon-A-Day, gaming, Online, personal, Sketch and tagged M:TG, my dragon, other websites, sleep. Bookmark the permalink.