One of the interesting things about running this blog is that I really do get some interesting spam from time to time. Some of you might remember that post from about a month ago about Norbert the Norwegian Ridgeback; now the spambots are getting a little more verbose:

Click to Enlarge, or don’t; I’ll explain in a minute.

This very dense comment is actually pulled more or less verbatim from the WoWWiki page on Onyxia, a powerful black dragon from the game World of Warcraft (and why Firefox’s spellchecker recognizes “Warcraft” as a word as opposed to the dozens of other things that I’ve typed into it over the years kind of baffles me).

Unlike Norbert, a quick Google Search for Onyxia returns a plethora of images. After skimming through them,  I decided to use actual in-game graphics as a reference, because that’s what the dragon actually looks like, even if it’s not 100% what she’s meant to look like- the differences between concept art and final product are often more than one might initially realize.

Anyhow, after scrutinizing various pictures of Onyxia, I came to the conclusion that she’s actually kind of ugly. 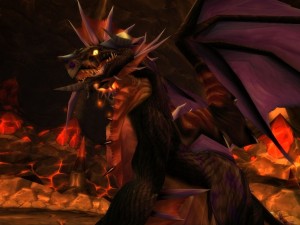 “Ugly” might be too strong of a word, but there’s definitely some “Rule of Cool” going on here. Clearly, I’m not the person making monsters for Blizzard, and I have no idea if there was an existing description anyplace, but her proportions seem odd (notably the thickness of her wing joints), and the combination of what seems like as many spikes, fins, and wattles as could be crammed into a single dragon at once kind of bothers me. 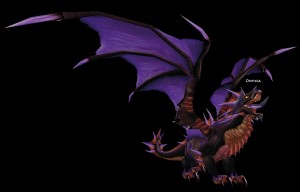 Which isn’t to say that I’m that much better about fins-per-square-foot, but at least my fins retract, and I like to think that they make more sense. Oh yeah, and DEM TEEF.

Upon further examination, she also bears a very strong resemblance to the Dungeons and Dragons 3.5 edition’s Black dragon. Most notably, the forward-curling horns and the tall dorsal fin that starts just behind the head, which makes me scratch my head and wonder how much design space could there possibly not be for “black dragon” that Onyxia bears that more-than-passing resemblance, but I digress.

No, actually Idon’t digress.I realize that I’m not a fan of this dragon, and the unpleasant realization that as I’ve already invested the last 45 minutes or so to looking for references and this stream-of-consciousness about her, I guess I’m stuck.

So on that note: 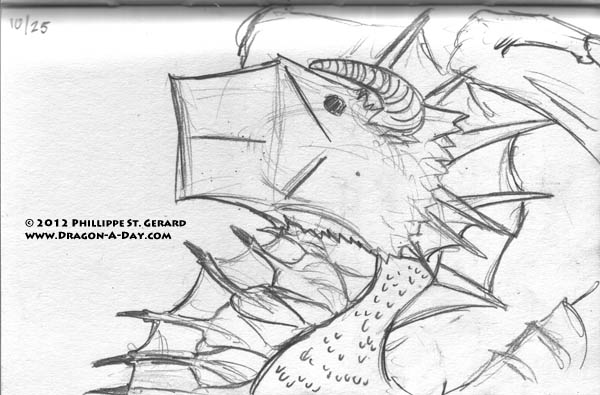 While she’s not gorilla biscuit ugly, for me she came close. Paper bag masks have also been on top of my mind the last few days- do you know how hard it is to find a large paper bag in New York City?