Before I get bogged down in gameplay semantics that would only be interesting to me, here is the sketch. 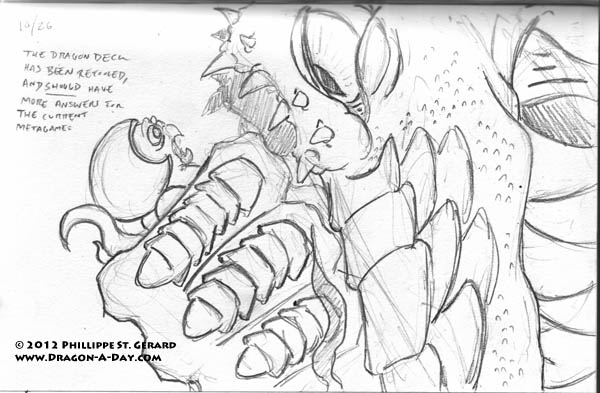 “The Dragon Deck has been retooled, and should have more answers for the current metagame.”

If you don’t feel like reading through a brief description of my playgroup’s Magic: The Gathering: Commander metagame and some tweaks to a deck, I’ll completely understand.

Now, for the rest of you nerds: So I was playing with my EDH Scion of the Ur-Dragon deck, the one that I’ve mentioned several times in the relatively recent past, and another player played a Callous Oppressor, which caused the mighty Dragon Deck to grind to a halt- for some reason, he didn’t ask me to name a creature type.

The point of me telling you this is that this silly little octopus-man somehow caused my army of giant flying dragons to stutter and grind to a complete halt while I scrambled for an answer that didn’t involve blowing up half the world, because that’s what the Dragon Deck had slowly evolved towards. At one point I had more ways to deal with annoying creatures that didn’t involve attacking as well, but the deck had become reliant on smashing with creatures like Flameblast Dragon, Balefire Dragon and Dromar, the Banisher to reap effects as well as deal damage, which I couldn’t do because the pesky cephalid had sneaked out on turn three or so.

So while I was sick this week I took it apart and tweaked it a whole lot, giving it back some dragons that I didn’t feel were always useful (I’m looking at you, Vampiric Dragon; when I get a copy of the new Niv-Mizzet, it’s you or Shivan Hellkite that gets the ax), and removing some “non-gentelmanly” cards like Obliterate, because not only does the reset kind of suck (because Commander games aren’t long enough without starting over partway through), the Dragon Deck should not be panicking and blowing up the world because it’s in a bad position; it should be unleashing its wrath, like a dragon ought to.

I think I first set out to write a lot more about the metagame and whatnot, but I realized that it’s actually rather late, so I should probably go to bed if I’m going to go play with my shiny new deck tomorrow, er, today.