“Hey Chopper! How about running a few laps with us?!”
Hey later man, I’m eating a celery stick. This is hard exercise.”

-From the Bod Squad PSA “Exercise Your Choppers.”

So Mordicai commnented on last night’s post about The Interloper:

“… With the teeth– I think i said this before, but why not make them all individually motile? Like Nausicaa’s God Warrior’s teeth?”

And yes, he has worked that “individually motile teeth” angle before (see his comment here), and I kicked it around, though I didn’t fully understand what he meant at the time. I pretty much ran with it until I got bored.

Anyway, I told you that story so I could tell you this one. I started thinking about his comment (and even researched Nausicaa’s God Warrior, though I could not actually find a video of the teeth in action), and started writing a response to it. When the response got up to around Word 235, I decided that it might just be better to do a post about it.

Just so you have an idea of what he meant, these are the teeth, presumably in action.

So, why not make the teeth able to move on their own?

At least in part because I’m having a hard time seeing what the use of individually motile teeth would be. I haven’t seen Nausicaa, and somehow there’s no clip of the God Warrior on the YouTube, but the images and descriptions I’ve seen of it kind of give me the impression that its teeth are more for show than anything else.

That notwithstanding, there are a few other reasons against it, at least in The Interloper’s current incarnation- the fact that it has a lower jaw at all kind of negates the need for teeth that move. The (usual) purpose of a tooth is to hold, crush, grind or shear food into pieces small enough to swallow.

Most animals accomplish this by bringing their teeth together or rubbing them against each other, which in probably around 99% of cases requires a second set of teeth to provide a surface to rub against or another cutting edge to break the food item with, or at least hold the food item in place so that one set can be brought to bear on it.

That having been said, if the teeth were the only things in its head, similar to a lamprey’s mouth, and the teeth either moved individually, or they were on some sort of muscular ridge or “shelf,” and it could use them to rasp at its food (like the overly hooked tongue is currently designed to do), then the teeth moving of their own volition not only makes sense, it’s the only logical way that the creature could do anything in terms of eating things larger than its throat without resorting to tearing it apart with its claws or liquifying it with some sort of venom.

Of course, this would call for a differently-shaped head. 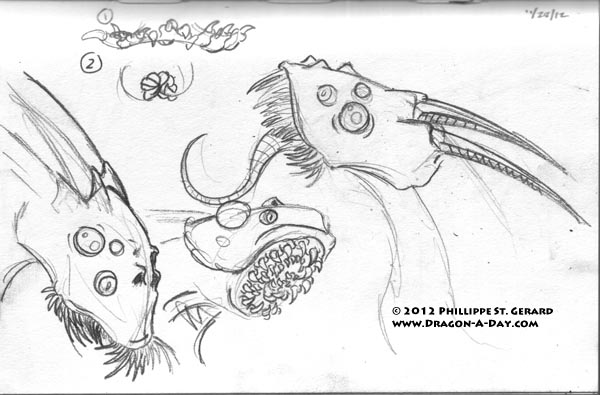 Another argument against the “dancing fang” is that from a suspension-of-disbelief standpoint, there’s not much of an argument in favor of it because remotely few, if any living predators move their teeth around like that. 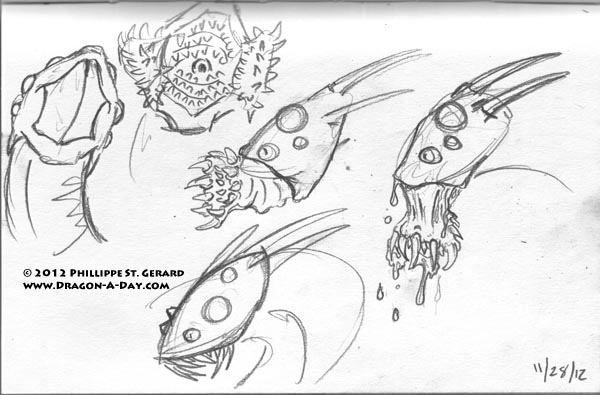 The notion that they might not be teeth and actually toothlike structures for another purpose, whether related to feeding or something else is a valid one, but The Interloper has already declared its carnivore status, and must perforce at least look partly the part, so sleek lines and sharp edges are part of the package. As I mentioned while first working on the idea of individually motile teeth, there are a whole lot of predators in my collection of dragons, though to be fair, that is a large part of my concept of “dragon.” And probably yours too.

Unless of course, it’s specifically going to grab hapless creatures with its flexible teeth as opposed to its jaws, which seems like a strange way of going about doing things, unless its neck is very short and its teeth have reach for some reason (but then it might as well have a mouthful of tentacles or something else, which is a bit too much of a departure from the insectile hybrid that I first set out to make). 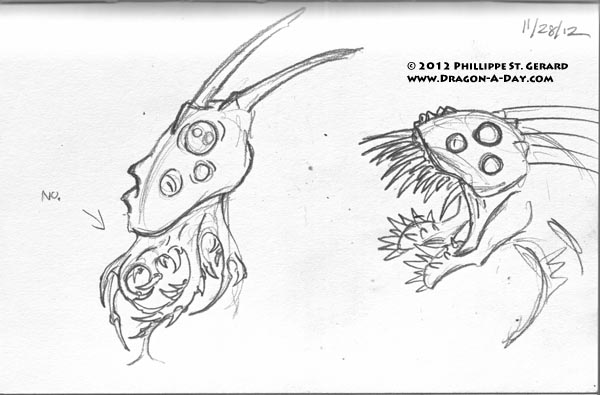 So in closing (as we crest the 700-word mark) no, The Interloper will not have teeth that move. This is because it actively uses its teeth for killing, and wriggly incisors aren’t advantageous, nor do they get the idea of “killing machine” across as well as pointy things that tend to stay in place.

And that’s all I have to say about that at the moment.

This entry was posted in anatomy, Dragon-A-Day, Online, philosophy, Sketch and tagged diet, teeth, The Interloper, what makes a dragon. Bookmark the permalink.