Thinking on the dragons that have come out of this project so far, most of them have been heavy groundthumpers who could only get airborne through the judicious application of magic or other suspense of disbelief. Others haven’t had wings at all. For some reason, flight just seemed to be a given, and not entirely worthy of consideration or exploration, even.

So after giving it some thought, I came up with this. 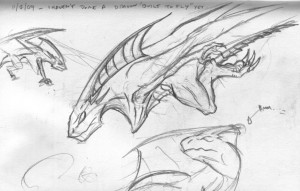 I had originally assumed I would come up with something that was more of a sinuous, Quetzalcoatl-like creature, or something akin to that legless bird from the Shel Silverstein poem (if it never touches the ground, it doesn’t need legs, does it?), but I like this one. I wanted a quadruped, but I had trouble fitting the forelegs in- which is probably a big argument against flying septapod vertebrates- but I like them in that pose for stooping. The crest might be a problem, as demonstrated in the lower right, but I’ll figure something out. I like it, but it doesn’t turn well, or at least not when I’m tired and in a hurry to get to bed.

This entry was posted in anatomy, Dragon-A-Day, Sketch and tagged flying, skyreaver, wings. Bookmark the permalink.