I’m not sure why I wanted to do this, but I wanted to have the dragons from Day 1 and Day 25 duking it out. 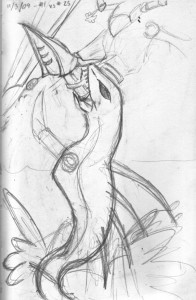 I’m not sure why I had such a hard time with this- I think it’s because the pelagic dragon was so thinly thought out and difficult to pose, then when I checked it against the original, it’s overall mediocrity kept throwing me off. I’ve come a long way since then- it’s surprising the progress that’s come along in just 50 days. I ought to go back and fix him up some…

With that in mind, I thought about it some more, and decided on the dragon from Days 2-4, because 2 time 25 equals 50 anyhow: 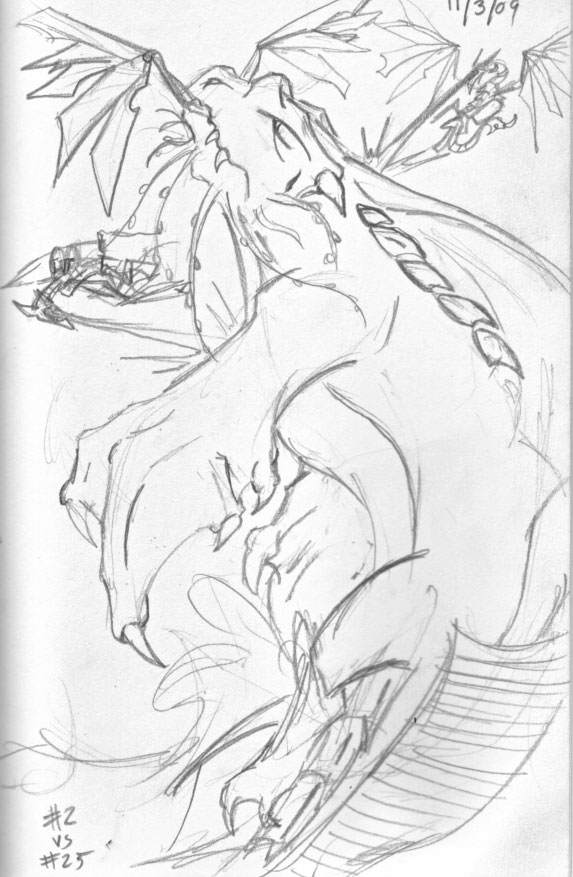 Not that the idea of a Giant Sea Monster breaching and attacking a flying thing is that original or anything, but seriously, it’s probably the only way that the twain could meet. And the Benthic dragon is big, but it’s no Leviathan. *

And water is hard to draw.

“I do not know what words the merfolk used to coax the barbel-jawed ones to leave the deeps and wage war on the flying machines that the men and dwarves have built- perhaps they spread the fear that if this strange alliance overtook the forests, they would have nowhere else to turn but the seas.

In either case, the killing lights that the machines used to lay waste to the Roothold are apparently not enough to penetrate the hides of the elder Deepwyrms, and those foul-tempered creatures have taught the combined forces of man and dwarf a healthy respect for traveling over the seas, but still freely wage land war.

At the same time, I can only wonder how long the merfolk and the Deepwyrms will enjoy this position of superiority until the allied kingdoms of Man and Dwarf devise some sort of seafaring mechanical monstrosity, and punish their arrogance. More than likely once the airbreathing realm is under their control; that is what sound tactics would dictate…

And the Men and Dwarves have been nothing thus far if not masterful tacticians.”

From the journal of Abhadhalhahworf, Lobster Dragon.