Well, the committee-eating dragon (Or CED, for short) from two nights ago was tearing through the Twittersphere*, so naturally there had to be a followup with the newly minted social media star. 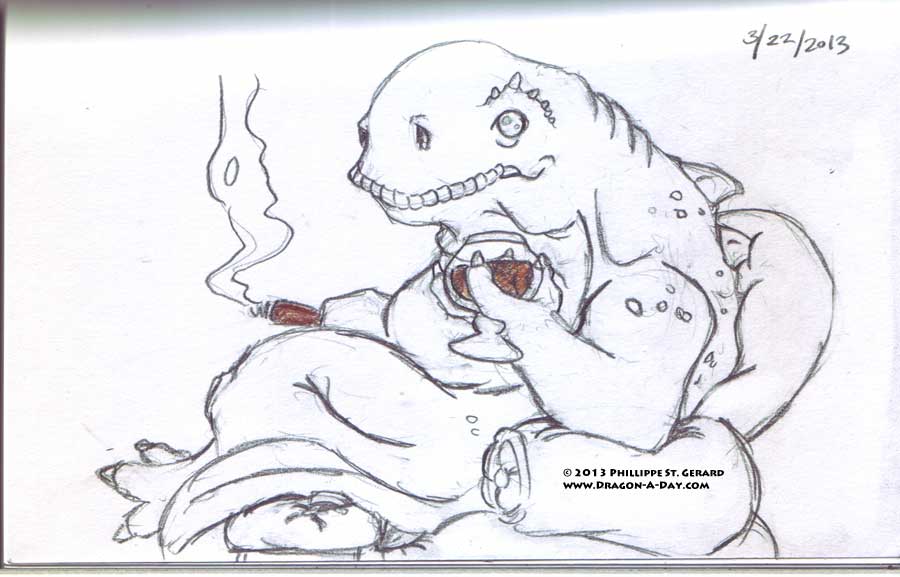 D-A-D: Well, thank you for having us.

CED: Can I offer you something? Brandy? Cigar? Ladyfingers?

D-A-D: I have to admit, when I was on my way out here, I didn’t quite know what to expect from a dragon who openly eats people- the fans were even hoping that you would have shreds of flesh hanging from your jaws, but instead, not only is your lair impeccably clean and well-appointed, but you yourself are…

CED: More… civilized than my chosen prey might imply? I daresay, that the old adage “you are what you eat” has proven true with dragons of my bloodline. For example, I can tell that you’re not a PhD-track student.

CED: If you were, I would feel strangely compelled to ignore you, or perhaps spray you with acidic bile, and then ignore you, unless you had a draft with you, in which case, I would most definitely do both, and then tell you that your draft was imperfect.

D-A-D: Well, that’s one point against an advanced degree, then!

D-A-D: So, tell me, how do you manage to manage to approach your prey? I would imagine that a dragon of your stature (to say nothing of your reputation) has a difficult time simply walking into any institution of higher learning…

CED: Ah. You see, when the weight of a committee’s ego becomes too great, it actually creates a bend in the weft of time and space. When that happens, one of us simply steps through the resulting interdimensional rift, snaps up the offending overthinkers, and the resulting shift in balance usually slingshots us back to our home.

CED: Well, it doesn’t always work; sometimes one does get stuck for a little while as the Universe sorts itself out.

D-A-D: So what do you do in that situation?

CED: Usually just answer emails, or ignore them, whatever I feel like. Keep a low profile, mostly.

D-A-D: But what if, say a grad student came to where you were to talk to the committee member you’d just eaten? Would you have to eat them too?

CED: Takta’s grace, I should think not! Grad students are full of coffee and anxiety- that stuff will kill you! No… If push came to shove, then I suppose I might have to explain the situation. It’s never happened to me, but I’ve heard that they are usually quite at ease knowing the truth…

The post stops here, but the conversation may continue, based on how well it’s received. For those of you out there who might be offended: If you are, then perhaps there’s a reason, and you ought to think about changing your ways before a highly-cultured dragon stumbles out of the AEther and eats you.

* Well, not really, but I got some positive responses to the sketch. Do I really need a reason? I mean, he’s got a snifter of brandy and a CIGAR, for chrissakes.