First off, update, because I spent a significant portion of the day working on this, then other stuff happened:

There’s still shadows to add, but on the whole, I am really excited about how well that came out. You might notice that there’s some vector work around the other dragon’s eye and the scales on his snout; I had started working on that then realized that doing it in the style that I had intended to (which more or less amounts to drawing the sketch, but with various vector tools) would probably take the rest of my natural life, nevermind the 10 days before it’s due, and on top of that, the driver for my crusty old Intuos2 conked out without warning.

So I’m probably going to do the inking by hand and see where that takes me. I did it once as a warm-up, it took less than an hour and was pretty serviceable- it’s been a long, long time since I’ve done that kind of work by hand, and even when I was doing it, I was not all that confident about it. And in case you were wondering, I did the purple dragon with the technique described here.

Anyhoo, after arting all day, then sketching some nonessential stuff to try and clear my head, I buckled down and drew this strapping figure, which I am also pretty happy with, except for the hindlegs: 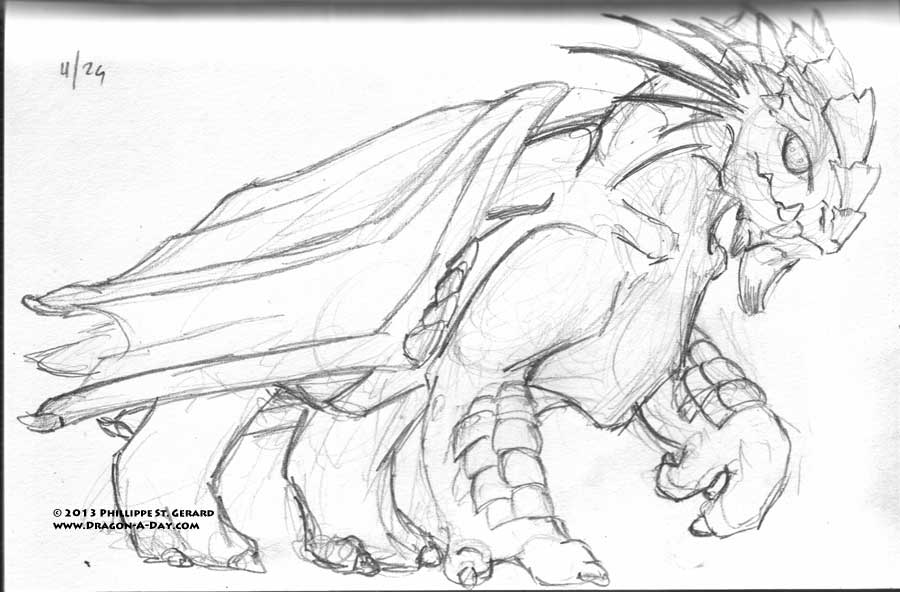 I actually planned this one, plotted all four limbs and everything, though the silhouette was looking a little Clydesdale-ish at one point, and I couldn’t make myself put more handlike claws on it. On the whole, though, quite pleased.