“With his long, flexible neck, along with his massive shoulders and chest, a male Macejaw dragon can generate a tremendous amount of force while swinging his heavy skull. Opponents who are are merely stunned by the blows are seized in the dragon’s jaws and worried as a terrier does a rat.” 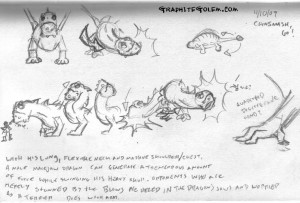 “By comparison, the female of the species is slimmer, though the two are roughly the same height. Her tail is much longer and thicker than his, allowing her to bring down prey with a flurry of rapid, alternating strikes, followed by a killing bite.” 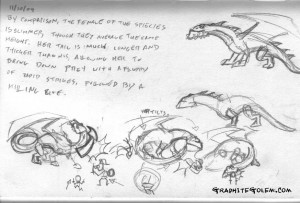 “Of course, in either case, the dragons tend to be tolerant of humanoid creatures, and rarely attack without provocation, though accounts do exist of tiresome adventurers being clouted midsentence with an annoyed turn of the head.”
-From “My Wanderings With Dragons, Annotated Version.”