Dragon-A-Day Online: Day 753: Getting Back to My Roots Somewhat.

(Not for the first time.)

Longtime fans of the blog (really, probably just me at this point) will remember that this started as a sort of design challenge, and gradually transitioned into more of a personal journal/series of random musings about the nature of dragons, then swung back briefly in the original direction and so on. Today’s post is a bit of both.

As you might also remember, I’ve been trying to figure out what to do with myself, workwise. This evening, I decided that I should probably at least think about using this space for something that I might eventually be able to box up and show to potential employers, though to be completely honest, this isn’t the first time I’ve had that thought.

At any rate, I decided that I would try my hand at making anatomical sketches and, eventually, a turnaround drawing or several of some of my dragons, and I decided to start with the Macejaw: 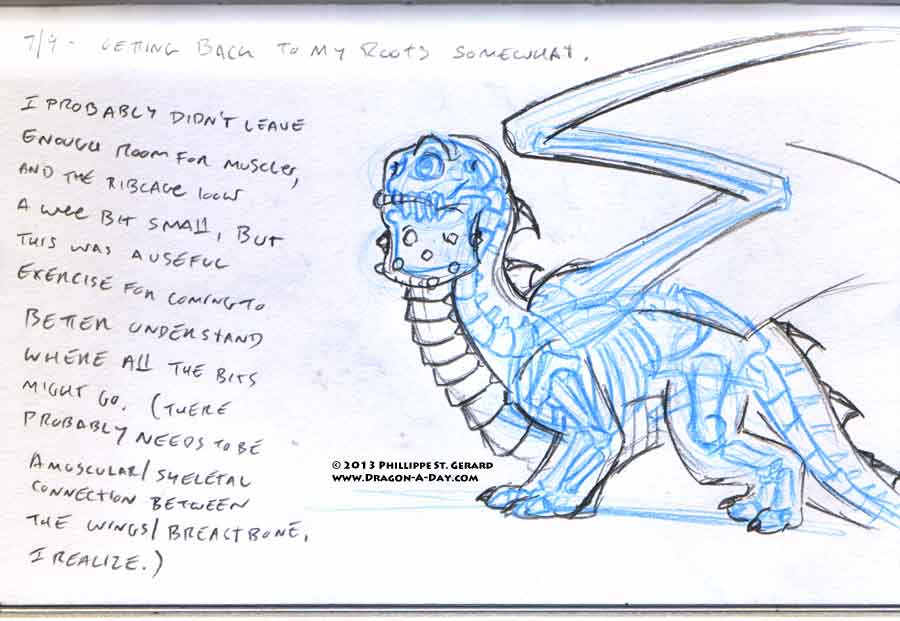 I probably didn’t leave enough room for muscles, and the ribcage looks a wee bit small, but this was a useful exercise for coming to better understand where all the bits might go. (There probably needs to be a muscular/skeletal connection between the wings/breastbone, I realize.)

I also realize that this probably doesn’t really help anyone but me, but I can’t imagine it would hurt to have that level of understanding. I’ll also have to do things like color/texture studies and whatnot, but I think it’ll be fun. I’ll also need to do some comparative anatomy studies- I had first come up with the idea of both halves of the dragon’s head moving when it opened its jaws, but that doesn’t make any sense- it would require i-don’t-know-how-many muscles to move that massive chin, when only the top half needs to move, like any ordinary reptile’s. Thing is, I’m not entirely sure how the jaws connect to anything with that setup. At least I have something to do now.

And I don’t know what happened; possibly because of the server move, but the early posts that I would have SWORN had had their images replaced are missing their images again. Sigh.