While looking at pictures of Desert Iguanas for a bit of paying work, I came to the embarrassing realization that I didn’t quite know what lizard scales looked like. After a bit of Googling around, I was unable to find any sort of unified lizard pattern- they just seemed to be arranged all willy-nilly, like a poorly laid cobblestone street. Snakes seem to be more orderly, but only in the body, and this is not a hard and fast rule. 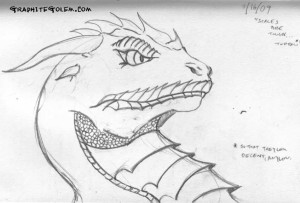 As you can see, I tried to lay a scale pattern in the space where the chin meets the neck, as the plates wouldn’t make any sense there. I had also tried to scale from the lips out, with no satisfactory success- it looked too “lizardy,” and not “dragony” to me pretty quickly.

I’m thinking that either I’m just too used to drawing them My Way, that I’ve got some sort of innate understanding (see Option 1) that doesn’t require me to draw scales and stuff, aside from the Important things like brow ridges or heavy scales, or maybe it’s the mammal-like reptile conclusion that I drew a month or so ago making me not want to go overboard on the lizardlike aspects of things. I find this quandry in general especially odd, as other artists have mentioned that my dragons are more “lifelike” than most, and I find myself struggling as of late to make them match up against my own perceptions of the Laws of Biology and Physics.

But I have decided on this:

Rule One of Drawing a Dragon: You’re allowed to do anything that you want, as long as it looks cool.

And on a similar hard-and-fast rule note, here are some more Selroth sketches. The first few are based on a critique of the last round, and the second is an expansion of the anatomy. Selroth suggested that I look at a wolf’s skeleton to attach the shoulders, and it worked rather well. 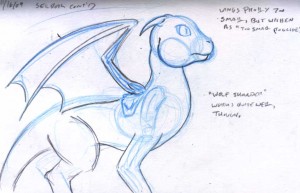 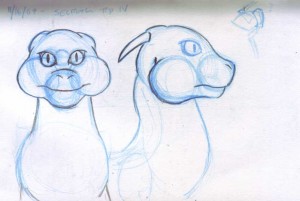 I’m not sure about the cheeks, but Selroth had some very precise proportions that he wanted to see for them, and that’s as close as I could get them.

Anyhow, it’s absurdly late, and I have a long day ahead, so it’s time to salvage what little sleep I can tonight. Thanks for reading, and I’ll see you tonight.

This entry was posted in anatomy, Dragon-A-Day, Sketch and tagged Rule of Cool, scales, selroth, what makes a dragon. Bookmark the permalink.