“…That’s cool too, but a dragon with acne or some kind of dragon herpes is pretty scary too…”

You never hear or read about dragons getting sick; no one even writes about dragonsbane (or dragonbane, or possessive forms of either), that mystical herb that, um, made dragons significantly uncomfortable, or something, (there was also dragonrose in the Flight of Dragons, which is a golden, [although they appear red in the film,] flower which puts dragons to sleep) anymore.

It’s not even in Wikipedia, instead leading to articles about a novel and a LARP, respectively. While this adds to the mystique of the indestructible, indefatigable dragon, it distances the creature from reality somewhat, though I suppose it’s safe to say that not many people would be terribly interested in reading about the Dragon Flu.

While thinking about the potential for illness within a draconic community, I remembered something that Larry Elmore had mentioned at Con on the Cob this year; that he had always wanted to do a painting of a dragon as they would be in real life- in his commissioned work, they were always too clean, he felt. A real-life dragon would be something like a land whale, with moss growing on it, and probably mites or other creatures in its hide. He also figured they’d probably have a bit of an odor to them, but I don’t really know how to draw a scent: 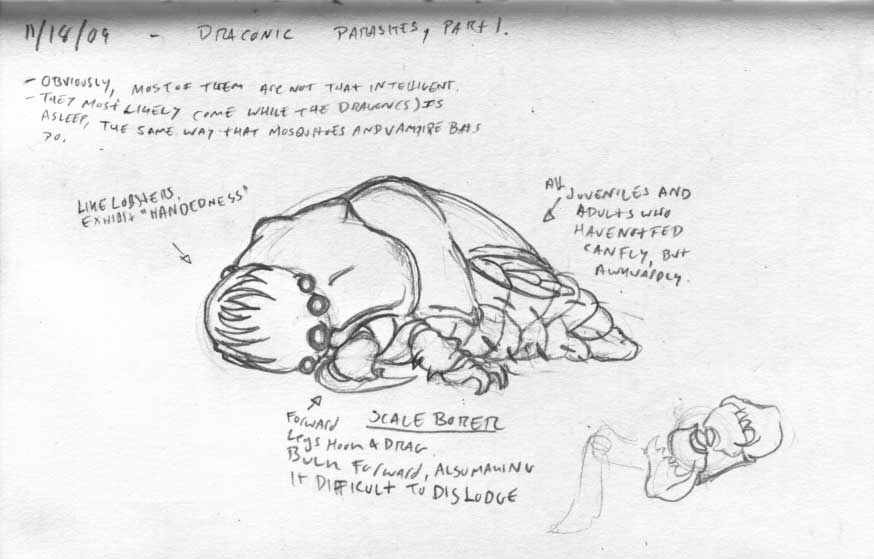 I wasn’t sure about the moss (it’d depend on the dragon), but it did make sense, if you consider the idea that they probably spend a lot of time sleeping, which made the mite (or other comparatively small parasite) idea make a lot more sense. Of course, anything big and strong enough to chew through dragonhide is probably not going to go around biting other creatures, except perhaps to kill them outright. (although E.E. Knight writes about bats feeding on dragonblood in Dragon Outcast.)

I had at first thought that any sort of draconic parasite would have to be unintelligent, because occupying an ecological niche (even in an arcanobiological ecosystem) that required you to feed on arguably the smartest, most powerful predators around would probably be the Dumbest Thing You Could Do. Now that I’m thinking about it some more, they might actually have to be smart- they have to plan their moves and probably even actively avoid whatever preventative measures the dragon might take to keep from being fed on while it slept, as well as its wrath when it awoke.

There are at least two more that I thought of, but did not have time to sketch out. And since this is a Dragon-A-Day post, here is your requisite dragon; the Plague Dragon comes back, this time in a slightly more accommodating view. We still can’t see all of it, but it’s a start: 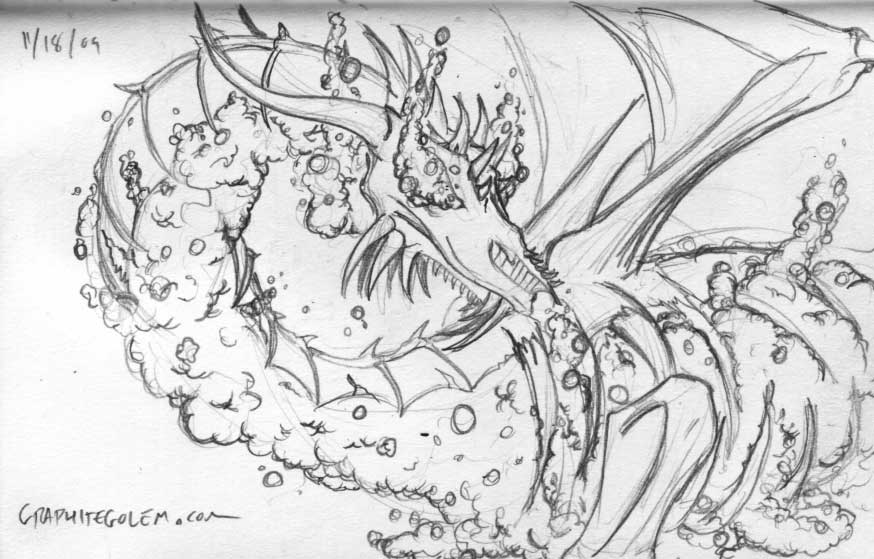 That’s it for now. I’ll see you tomorrow for punch and pie.