“…Soldiers come home, one leg less than they gone with,
We all walk around like there’s just nothing wrong with it…”
-Sister Hazel, “Tear By Tear”

I’ve never served in the military, and gods willing, I never will. At the same time, I know people who have, and thankfully they’ve all come back with all of the pieces that they left with.

Which makes the fact that I’ve been mulling over prosthetic limbs right in time for Veteran’s Day (which I am often only peripherally aware of because I’m a terrible American, apparently) kind of poignant. Or apropos, I’m not sure. I feel like I should be saying more here.  Sigh.

That having been (awkwardly) said, I did some more poking around on the Interwebs and saw some more modern/newsworthy animals with artificial bits, which led to the forelimb prosthesis here: 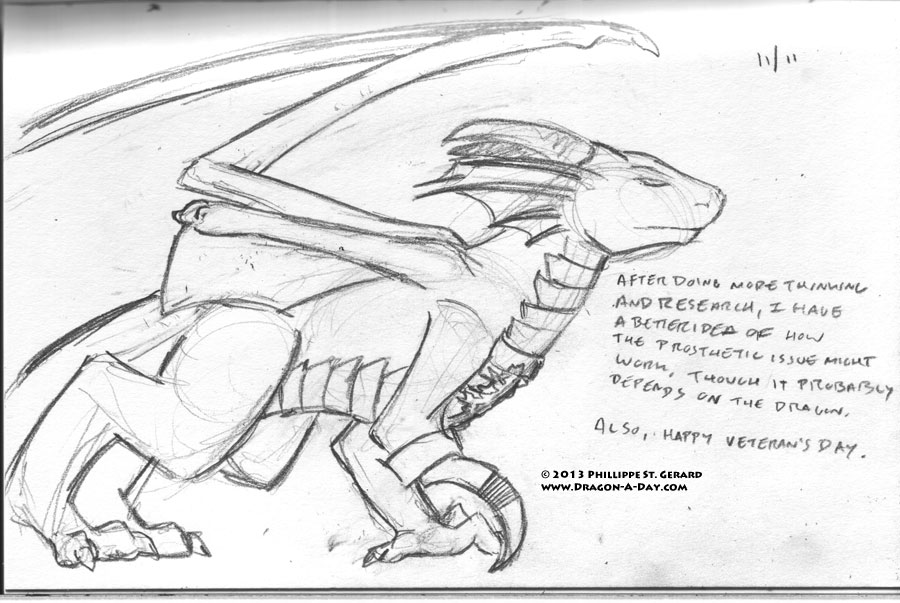 It’s been a long long time since the exactly one time I had to consider the forest dragon’s anatomy– it’s got very long limbs and fingers for its size, and in fact, I was trying to make sense of dragon hands at the time I drew it in full, so its hands and dramatically bent fingers might not even make sense anymore (while looking at them, I figured the dragon might use them for climbing).

I figure the curved prosthetic might hold weight well, as well as working for a slashing implement (hence the bladed bit) and maybe even a climbing tool (esp. as I couldn’t figure out how a prosthetic wing might work without the elbow- connecting the sail would be hard enough).

Finally, I’ll leave you with this: this veteran of an imaginary war survived. Tying that together makes me happy for some reason, though I wish I’d gone further into the… weatherbeatneness that the dragon would have had. Also need to come up with a name.