So I’ve been mulling over the prosthetic limb thing a bit more. Part of me wants to make it all steampunk-y because I’ve already let that into this story with the mechanical dragons in the first place. However, at the same time, I feel that that’s more along the lines of The Enemy, and that (at least) the forest dragon from yesterday and/or his allies wouldn’t have access to such a thing, if the dragon would even accept that.

Storyline concerns aside, the niggling problem of what the prosthesis’ function is still kind of bothers me (keep in mind that I’m mostly concerned with the forelimb at this point) For animals, it’s pretty much strictly locomotive, whereas on a dragon, it would be a hand as well as a support. So I started Googling around for human prosthetics as well, and the process was a mix of sobering as well as informative, though I’m still not sure what I can co-opt for this idea at the moment.

Anyhow, I did some sketching at game tonight before I did that and this is what I came up with; mostly I was trying to figure out how the thing might even stay on, like how/if the dragon could put it on one-clawed. Then I did a very brief anatomy sketch of the forest dragon at the bottom of the page, to remind myself of its proportions. 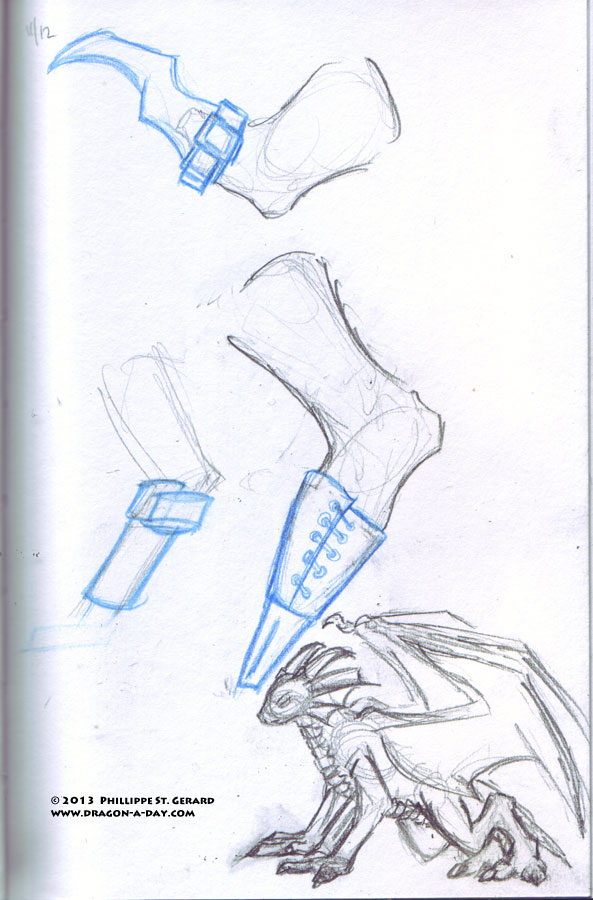