One of the things that I love about Dungeons and Dragons is the amount of thought that goes into the creatures that inhabit its worlds.

This is also one of the things that annoys me on a subtle level. Many monsters, especially iconic ones, like illithids, and dragons in particular, are often so “on model” that a group of them could be sitting in the same scene, and it becomes difficult to tell individuals apart, aside from wardrobe or other clues, as opposed to the way that one might tell two humans apart.

The dragons that I’ve been drawing in these posts are the archetypal, perhaps even idealized versions of their particular breeds, I think; individuals within any specific type might have subtle, but noticeable differences. (and I really need to look into some biology or something to get a better handle on that- many of the differences that make humans immediately recognizable are cosmetic or artificial)

With that, along with some more thoughts on the War Dragon society (particularly naming conventions), here are a pair of War Dragons that deviate from the norm presented here and here. 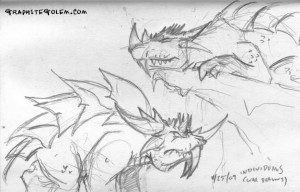 Mostly I was playing with the horns and a wee bit with proportions- if I had put them in full standing positions (as I likely will when I eventually revisit this idea) that might be more obvious. I was also toying with the idea of their environment- wasteland comes to mind, and often. Tonight’s sketch doesn’t entirely convey the idea that I was trying to get across; I think that I stuck too close to the originals to make it work, but it’s worth exploring further down the road.

Good night all, and Happy Thanksgiving to those of you in the US of A.