I’m not exactly sure why I decided to do it, but I thought that the To Do Hydra needed a bit of a facelift- it’s been pretty much the same though all its iterations, and really seemed like with the increased attention I’ve been giving to anatomical correctness lately, this visual representation of the clutter in my life should be up to par.

However, I couldn’t get as far past the original design as I wanted to, though to be fair, it has in fact come a long way; I just kind of felt that the “finblade” on the head seemed a bit… I don’t know, trite? I feel like I’ve been doing dragons and/or reptilian characters with similar accoutrements since I was 12, and in fact, I have, though I sadly don’t have an old-timey image to show you tonight.

Anyhow, I kicked around some new heads while trying to keep to the serpentine, accessorized, large-fanged head of previous years, and this is what I came up with so far: 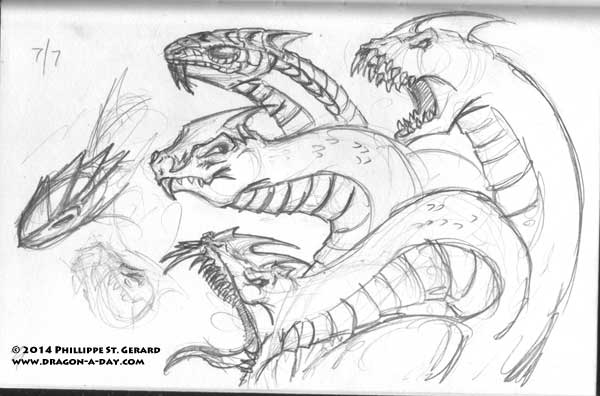 All things considered, there might be less wrong with the current iterations than I originally felt, but that might also have been the simplicity of the original limiting what I could do without feeling like I’d gone in a completely different direction.

It certainly has come a long way, though.

This entry was posted in anatomy, Dragon-A-Day, Online, Sketch and tagged dragon, head shapes, hydra, oldie, scales, To Do Hydra. Bookmark the permalink.