So I came across this the other day, which may or may not be accurate, but I haven’t kept up with Pokemon for like 9 years at least. Naturally, the only thing that concerned me was the dragon row.

Dragon/Bug? Been there. Did that.
Dragon/Dark? I’m not sure what that would entail, and my only reliable source on the subject doesn’t seem to be much help. The blog has its share of evil dragons, so I think we’re good.
Dragon/Dragon? ಠ_ಠ
Dragon/Electric? Yup.
Dragon/Fairy? I don’t remember, but I feel like I have… Oh wait, I did.
Dragon/Fighting? Depends on what you mean by that. Either I did, I definitely did, or I didn’t. As some Fighting-type Pokemon tend to use martial-arts-type moves, as far as I remember, I might not have. But then again, there are some that just live to whup ass, so I’m probably covered…
Dragon/Flying? Uh-huh.
Dragon/Ghost? I’m counting these.
Dragon/Grass? Okay, now this I know is untouched territory.

I decided to start at the beginning of a three-step evolution, so the resulting sketch is probably less dragony than I would like, and way cuter than I would have done normally for a fighting monster: 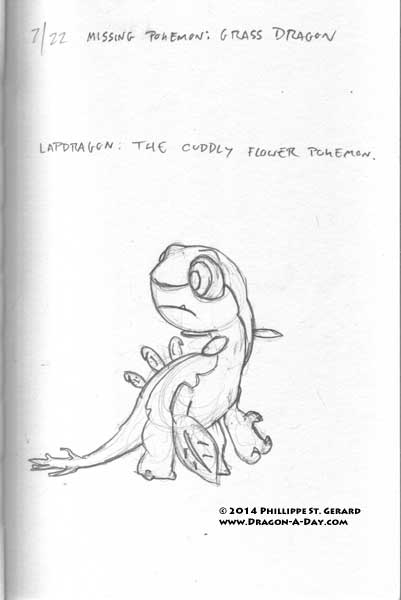 It might need the areas of color a bit more standardized; I figured the tail would be brown, the mid body(from the legs to the top of the head might be green, and then the underbelly yellow or something snapdragony– I was thinking a red ought to be in the composition someplace. It’s more the pattern than anything else; I didn’t spend as much time as I would have liked looking at examples.