One of the principles of animation is that you figure out how an action (or portion of an action, in some cases) will start, then where it will end, and then draw the position in the center.

I told you that because instead of trying to extrapolate the middle of the evolution (I decided this afternoon that Lapdragon should be a 3-stage evolution, though some, but not all of my favorite Pokemon are two-stage), I figured I would go to the end, and make it easier on myself by filling in the middle: 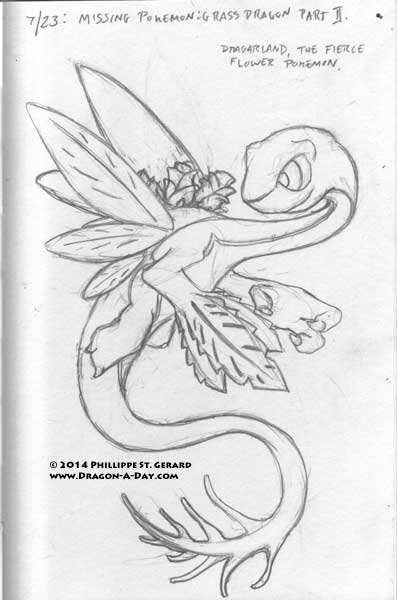 I’m not sure what I’m going to do with the petals Lapdragon has on its neck; maybe they’ll turn into buds and then just… migrate to the back or something- Pokemon evolutions are largely handwaved anyway.

The hardest part was coming up with a name. I was trying to think of something involving the word “bouquet,” and had originally planned to put a lot more flowers on it, but I got stuck. I even looked at other languages for inspiration, but nothing. Finally, I settled on “Dragarland,” which sounds enough like a Pokemon name for me to be okay with it.