At the end of a long, frustrating day:

Me: What are we even gonna do?!
Myself: I don’t know… gimme a damn dragon head. Can you do that?
I: I think I can. Gimme a minute.

So I sat for a while, and couldn’t think of anything. So I grabbed a random number, and stuck that into the post URL, deciding I would draw the head of whichever dragon was featured in said random post.

The number? 2388. The dragon (there’s several on the page) The Lobster Dragon.

While this would have been hard enough on its own (the head is kind of muddled and not as dragony as it could be, though in light of other arthropod-based hybrids, it probably passes with flying colors now), I ended up only using the random post, as opposed to the more refined drawing in the post linked above. Error of judgement on my part, but I still managed to do a good drawing, I think: 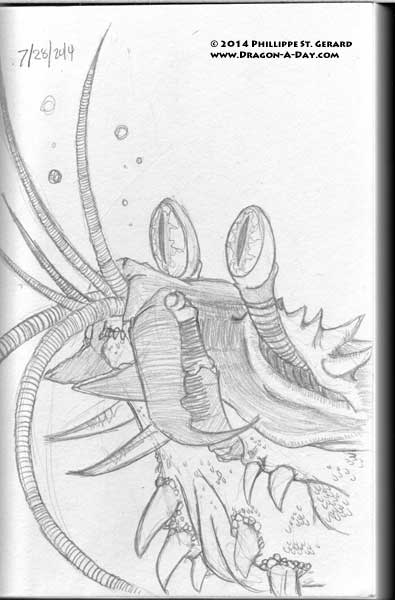 Looking at it now, the long tusks got a bit out of order, and I probably should have tried throwing some shading on the whole head, not just the carapace-y bits, but I still like it. I need to be someplace in 7 hours or so, so I’ll just cut it short here. G’night everyone.